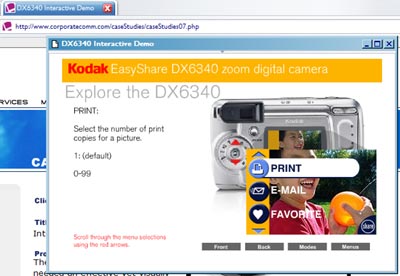 An interactive camera demo from Corporate Communications, Inc.
Clive Thompson writes about some interesting research [PDF] by Ann Schlosser at the University of Washington into how the use of interactive product demonstrations on websites can produce “false memories” of product capabilities, compared with more conventional static presentation of features (the example is a camera):

Later, she tested them on their ability to recall details about the camera. She intentionally included details that were false, but sufficiently plausible that they might have been true. The result? The people who viewed the interactive demo of the camera were much more likely than the folks who’d only viewed static images to “remember” the false details as being present. Or another way of putting it: The interactive demo was more likely to produce false memories of the product — potential buyers who thought the camera could do things it can’t.
Why? Schlosser theorises that it’s partly because interactivity encourages more “certainty” in our memories, and thus increases the likelihood that we’ll believe suggestively false details to be true.

As Clive goes on to mention, it’s worth considering how much this kind of effect could be to companies’ benefit if customers make purchasing decisions as a result of believing a product is better or has more features than it really does. Is it possible to use the tactic deliberately? Is this done? Can it be called unethical? Is the possible “experience overload” of an interactive demo similar to, say, an over-enthusiastic salesperson talking nine-to-the-dozen and concatenating feature lists into a stream of impressive-sounding non-sequiturs?
Will consumers, in fact, ever let on that they’ve noticed the product they bought doesn’t necessarily have all the features they assumed it did? Or will they assume (correctly, in fact) that they must have made a mistake?
We all know, I’m sure, that most people blame themselves for mistakes made when using (or choosing) technology*. Mark at Another Useful Blog tackles this very well in relation to the design of armrests on the Metro-North and Long Island trains in New York, which consistently damage passengers’ clothes by getting caught in pockets, etc:

“You feel more like an idiot than anything … But then you realize, they could have designed it better.”
The first part of that statement hints at another reason why users may not complain about badly designed interfaces: they simply do not perceive a problem as being caused by bad design. Instead, they attribute the error to their own assumed incompetence. This behaviour can also be witnessed during some empirical usability tests… users think that the problem lies within themselves…

In particular, this whole area reminds me of a quote from Lee Iacocca:

Remember this: Anybody who ever buys anything – a house, a car, or stocks and bonds – will rationalise his purchase for a few weeks, even if he made a mistake.

*Sticking briefly with the camera example – if users remember the word “Zoom” from the demo, and remember seeing an image zooming in, and becoming more detailed, they might perhaps misremember that as an “optical zoom” even if in reality it is only a low-quality “digital zoom”. If you’re interested in cameras, you’d probably be checking whether it had an optical zoom in the first place, but otherwise, what you will remember is that the camera has “Zoom”.