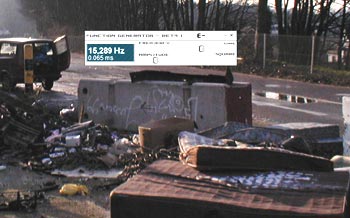 High frequencies being tested in the urban badlands: see, no teenagers here!
A lot of people find this site through searching for something along the lines of ‘Mosquito high frequency anti-teenager ringtone’, and are presumably disappointed when they find that there is no such ringtone to download, even if just because they’d like to test it on friends and family. (More on the Mosquito device) There’s also the more possibility of course of using the ringtone as a kind of ‘secret ringtone’ that, supposedly, only younger people can hear, so you can receive text messages, etc, e.g. while in class, without adults noticing, though I’d have thought that was partially the point of the vibrate mode.
Anyway, I thought I might as well give those searching what they’re looking for, sort of.

EDIT (31.v.2006) : I’ve got rid of the mp3s, because even encoded with the LAME ‘insane’ (320kbps) preset, the sound was too different from the purer tone of the wave files. The whole point about mp3 as a lossy compression format is that it reduces the percentage of high frequencies that are (normally) less audible to humans: i.e., the high frequencies which are the whole point of this exercise are given much lower weighting.
30 second, 2.6 Mb wave files (produced using Audacity) are now available again, hosted at the Internet Archive (thanks for the tip, Andreas):

The above three files are hereby placed in the public domain.

Here too is a link to a BBC page where you can hear (and download) a 256kbps mp3 of the actual Mosquito sound – www.bbc.co.uk/wiltshire/…shtml.

I suppose MIDI files of the tones would be better: if anyone can supply these, this would be great.

Equally, I don’t know if the speakers in a typical mobile phone are set up to respond to frequencies in this range properly, so it may be that even the wave files will be useless when played using a phone.

Note: I’m only 23, but none of the above sound files sounds especially irritating to me (though my sound card and speakers may not be giving me the full effect that the Mosquito device itself would. I can hear the 20 kHz fine and it certainly wouldn’t drive me away: it’s similar to the hum an older TV or CRT might make.

EDIT (15.vi.2006 am) : This post is now fifth result in Google (UK) for ringtone download – wow! If only a few people would click on some of the ads, I might actually make a few quid…