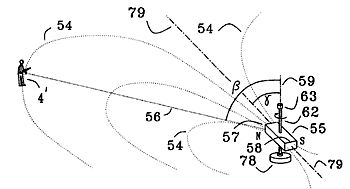 “There was one speaker at FOO this year that would literally have blown my brain away if he’d happened to have had his equipment with him. Ed Boyden talked about transcranial magnetic stimulation – basically how to use focused magnetic fields to stimulate sections of the brain and hence change behaviour. He talked about how you could use this kind of stimulation to improve mood and fight depression, to induce visual phenomena or reduce schizophrenic symptoms, hallucinations and dreams, speed up language processing, improve attention, break habits and improve creativity.
…
He ended by telling the story of one prominent thinker in this field who developed a wand that she could touch against a part of your head and stop you being able to talk. Apparently she used to roam around the laboratories doing this to people. She also apparently had her head shaved and tattooed with all the various areas of the brain and what direct stimulation to them (with a wand) could do to her. She has, apparently, since grown her hair. I’d love to meet her.”

Now, the direct, therapeutic usage of small-range systems such as these is very different to the discipline-at-a-distance proposed in a number of Loos’s patents (where an ‘offender’ can be incapacitated, using, e.g. a magnetic field), but both are architectures of control: systems designed to modify, restrict and control people’s behaviour.
And, I would venture to suggest, a more widespread adoption of magnetic stimulation for therapeutic uses – perhaps, in time, designed into a safe, attractive consumer product for DIY relaxation/stimulation/hallucination – is likely to lead to further experimentation and exploration of ‘control’ applications for law enforcement, crowd ‘management’, and other disciplinary uses. I think we – designers, engineers, tech people, architects, social activists, anyone who values freedom – should be concerned, but the impressive initiative of the Open-rTMS Project will at least ensure that we’re able to understand the technology.