Some of the most extreme consumer reactions may be expected to occur where the architectures of control in products explicitly remove control from the user and pass it to an outside party. 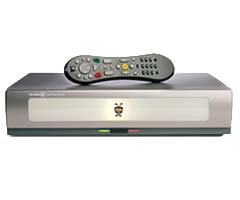 Perhaps the TiVo logo was inviting this kind of modification (left image from TVsquad.com) but despite TiVo’s use of a ‘renewable’ DRM system, which ‘take[s] away features that consumers paid for when they bought their devices’ (Cory Doctorow), it has not attracted much opprobrium. So far, at least, the benefits and enthusiasm for the device outweigh the restrictions imposed by the architecture of control for most consumers (right image from TiVo.com).
One method of achieving this may be products which only continue to function if mandated software updates are automatically downloaded, such as the TiVo–this becomes contentious when the software update explicitly changes the product’s functions from the feature set with which it was originally purchased, with commercial benefit intentions. With the TiVo, an automatic update in autumn 2004 “puts restrictions on how long your DVR [digital video recorder] can save certain kinds of shows–so far, just pay-per-view and video-on-demand programs.” [85]
However infrequent such function-limiting updates might be, the feature set of the product has been changed, and any attempt to avoid this change (e.g. by unplugging the TiVo from the telephone line to prevent the update occurring) will cause the product to cease functioning entirely, thus removing all the features purchased. Whatever dissatisfaction consumers may have with this, there are alternatives, such as other personal digital video recorders–although none with quite the TiVo’s combination of attributes–or, for more technically inclined consumers, building a custom “home media convergence box” using software such as the MythTV suite [86].
The case of external control which is arguably most likely to cause a widespread consumer reaction, outside of technical users, is the External Vehicle Speed Control system–with intended social benefits–proposed by Oliver Carsten at the University of Leeds’ Institute for Transport Studies. This is perhaps one of the most clear-cut examples of a disciplinary architecture of control: 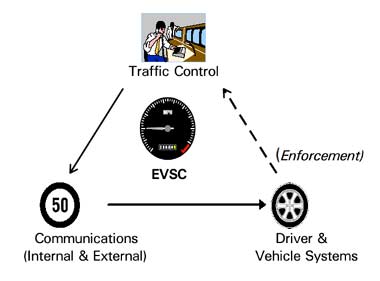 In the original text accompanying this schematic of the EVSC’s components (from this document [PDF]) , the driver is categorised–along with the brakes and traction control–as a ‘mechanism that reacts to speed limit information‘. Nevertheless, the driver is presumably not a reliable enough mechanism, as he or she needs to have the speed limit enforced by directives from ‘Traffic Control’.
Carsten’s own survey, involving both members of the public and representatives from the police, motoring and motorcycling organisations and environmental groups, concedes that:

“[There is] a general resistance to the concept of speed control… it was suggested that a system such as speed control that takes control away from the driver could lead to the loss in [sic.] skills in ‘reading the road.’” [87]

There are also many possible implications and concerns relevant to this type of system, into which there is insufficient scope to go here, ranging from attribution of accident liability, to the level of driver control (to what extent can he/she disable the system?), to implementing reliable fail-safes in the system, to the costs of installing and operating the hundreds of thousands of roadside ‘beacons’ that Carsten proposes (an alternative being a GPS-based architecture).
Nevertheless, the EVSC system as proposed by the final (July 2000) Carsten report to the Department of the Environment, Transport & Regions suggests “mandatory usage” in 2019. The report–interestingly–includes a disclaimer to the effect that:

“EVSC has the potential to bring about a very considerable accident reduction, but that potential can only be realised, if in the end there is public support for the introduction of EVSC.” [88]

As of 2005, “no policy decision has been made on whether or not to move ahead with the implementation of such a system for the vehicles on Britain’s roads” [89], but whether or not that ‘public support’ is eventually forthcoming, the most vocal reaction so far has been entirely opposed to the system, with the 2001 International Motorcyclists’ Public Policy Conference at Mulhouse declaring its opposition to the proposals and creating a petition including the line, “We note with extreme concern the tendency of governments to impose ever more intrusive and restrictive regulations upon the citizen” [90].
Regardless of the safety benefits of speed control (and the public, if surveyed, would possibly approve of the speed control on buses, coaches and trucks), it is surely the external part which will cause the most consternation if the EVSC plans do proceed further. Architectures of control which fall into this category may be the hardest of all for consumers to accept; it is taking the concept of the ‘nanny state’ to a limit where the nursery is teetering on the brink of rebellion.

Previous: Consumers’ reactions to DRM | Next: Some implications of architectures of control