Despite consumer frustration when they break, many products are designed and built to last far longer than might be considered ‘environmentally optimum.’ Simply put, if technology in a certain field is advancing at a rate such that newer products use less energy (in manufacture and use) than old ones (which may also be using increasingly more energy due to wear and tear), there will come a point where comparatively, it is more environmentally beneficial to replace older products (and recycle them to recover as much embodied energy as possible) with new ones [103].
Of course, encouraging consumers to replace their products with new ones is also the goal of many companies and their design and marketing teams, for purely commercial reasons. But what if these interests were to be dovetailed–the social benefit intentions of an environmentally optimum lifetime for a product, and the commercial benefit intentions of managed replacement times? 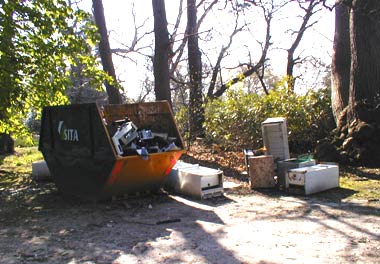 Hundreds of thousands of old refrigerators and other white goods are dumped every year; could an ‘optimum lifetime product’ strategy help reduce the problem?
An optimum lifetime product could ‘expire’ at the point when its optimum lifetime is reached (based on actual usage rather than averages for the sector, so as not to antagonise light users)–thus minimising the environmental damage caused. The architecture of control would prevent further usage.
Would consumers put up with this? Brunel University’s Professor David Harrison, who has worked extensively on technology for sustainable product design, including active disassembly and conductive lithography, comments that, “having a machine that decided when its lifetime was up, though was capable of working well, could be extremely frustrating” [104].
Nevertheless, when the idea is considered in the light of the end-of-life take-back legislation for cars and other products (e.g. the Waste Electrical and Electronic Equipment directive [105]), a more coherent scheme emerges: products which have a pre-determined lifetime (based on usage) and once that lifetime is up, they are returned to the manufacturer (perhaps the products even signal to the manufacturer that they are reaching expiry). The product could then be replaced, or a different model chosen, maybe depending on a licence agreement the purchaser has with the manufacturer or supplier. In effect, the consumer is simply renting the functions the product provides.
A system such as this would have to offer the consumer sufficient obvious benefits to be appealing enough to sign up to a rental-style agreement in the first instance. Whilst products which are always in an optimum state of efficiency would save some energy costs, this is unlikely to provide sufficient motivation. However, if the product’s original warranty were to be extended to cover the entire lifetime of the product until it expired, then this might be incentive enough–along with the promise of a shiny new replacement every few years.
The consumer would be renting the functions required, with no worries about servicing or maintenance; the manufacturer or retailer would have guaranteed income and a guaranteed outlet for its future products, plus full control of recovering (and recycling, cannibalising–or perhaps reconditioning?) the expired products (which presumably would have restrictions applied on issues such as customer modification, disassembly or customisation).
As has been touched upon earlier, would a much more common use of this kind of architecture of control, in conjunction with the rental model, lead to a noticeable change in consumers’ attitudes to property?Would no longer owning much of the technology used in everyday life (cars, computers, white goods, and so on) have a psychological impact on consumers’ attitudes to those products? There are so many possibilities, including users deliberately accelerating the expiry of their products to hasten the arrival of a brand-new replacement, that a much deeper investigation of the idea is worthy of consideration. Depending on the product, there may well be a significant degree of attachment on the part of the consumer–for example, GM’s compulsory repossession–and crushing–of the EV1 electric cars which were only ever rented to customers provoked both outcry and some genuine upset among people who had been using and living with the cars and their idiosyncracies [106].
Equally deserving of consideration, of course, is to what extent the social benefit of better environmental performance would be negated by the welfare issue of locking poorer consumers into expensive product replacement cycles which do not individually benefit them. A family whose washing machine automatically expires even though it still worked perfectly, and who are unable to afford to keep paying the licence, may be better served by a functioning, inefficient machine than by the larger environmental benefit of a non-functioning machine.
There are some much less complex architectures of control in products which could also achieve social benefits in terms of lessening environmental damage. Office lighting could automatically switch off if no-one was in the room, or if the level of sunlight were detected to be above a certain threshold. A car throttle could prevent excessive or unnecessary revving. Alternatives which lessen the ‘control’ aspect could include devices which simply warn users about how they are being operated, for example a refrigerator with an alarm which sounds if the door is not closed properly, or built-in electricity meters on household plugs. Even rubbish bins could be made smaller to make consumers more aware of how much they are throwing away.
Strategic intentions behind some ‘environmentally beneficial’ architectures of control

Previous: Some implications of architectures of control | Home