If consumers are aware that their behaviour is being restricted, and the idea is presented in this way, then negative reactions to technology are likely to arise–to the level of an increasing frustration, perhaps even ‘resistentialism’ [79]. Now that she is a consumer rather than chairman of the RIAA, even Hilary Rosen is apparently dissatisfied with how Apple’s iPod DRM is restricting her behaviour–“Why am I complaining about this? Why isn’t everyone?” [80]
Perhaps because of Apple’s phenomenally successful iPod marketing over the past couple of years, the product (along with iTunes) is rarely out of the news: hence, consumers’ reactions to Apple’s architectures of control (and DRM in music more generally) have been widely circulated. It is not unreasonable to assume that this body of reaction may be taken as indicative of the trends that will become apparent over the next few years as DRM and other architectures of control with little obvious social benefit spread to more consumer products.
PC Pro magazine’s widely publicised investigation of the UK’s online music market in April 2005 revealed significant consumer frustrations–some with the fidelity of the (usually lossy) downloaded tracks, but many with the product lock-in enforced by DRM and format-based architectures of control:

“‘What people don’t understand is that when they buy an iPod or other digital music player, they’re being tied into a system,’ believes Deputy Labs Editor, Nick Ross… One PC Pro reader spent Â£40 downloading music from an online store only to find that although his MP3 player played Windows Media Audio (WMA) files that he created, it wouldn’t play the copyright-protected WMA files he’d bought. ‘What was I supposed to do,’ he said, ‘take them back to the shop? It’s way too confusing.’” [81]

Comments from members of the public in response to BBC News’ coverage [82] of the PC Pro story reveal more of the same concerns, along with a tale of a whole (paid-for) music collection being automatically, irretrievably, locked up due to using Windows’ System Restore function. There is praise for the convenience of being able to download one track at a time as opposed to having to buy whole albums as with a CD, but dissatisfaction with the level of information provided to consumers: how can fairly technical restrictive architectures of control be presented in a way that is easy to understand for the average consumer, whilst not putting him or her off the purchase through negative or complicated language?
This may well be a marketing problem that companies employing restrictive architectures will have to consider very carefully: trusted computing can at least be presented as offering ‘security’ (however vague or even erroneous that may be), but it may be difficult to maintain the ‘convenience’ theme with DRM’d music or movies so long as there are less restrictive alternatives available–and especially if those alternatives are familiar and easy to use, such as CDs. One consumer’s reply to the BBC story sums this up:

“The whole concept is ridiculous. Would you really buy a CD that you could only play on one brand of CD player? That you couldn’t play in the car as well as at home and in your CD Walkman? A CD that has sound quality comparable to an old cassette tape at best? No, no, no!” [82]

Steve Portigal, a customer research consultant whose work often employs ethnography and consumer behaviour studies to advise on product strategies, agrees that, because of consumers’ reactions, restrictive architectures of control may not necessarily offer companies the economic benefits intended:

“Products that surprise us with limitations in what we get, what we can do, what is expected, etc. will be met with disappointment, frustration, complaints, and perhaps abandonment. Companies will need to think carefully about setting and managing expectations, although even the best plans can go wrong once a ‘risk’ enters the zeitgeist.” [33]

However, he concedes that there is plenty of opportunity for increased use of architectures of control, simply because of consumers’ non-technical indifference or lack of time or motivation to understand the implications of what they are buying:

“It always pays to remember that people are busy, they aren’t thinking about technology, only a very very few want to think about it, want to understand the details and the risks, etc. There’s a minimum activation energy around an issue such as privacy or cost-rip-off that is set higher than we’d like to believe, most of us, and right now, the space under that level is there for the exploiting.” [33]

Once an architecture of control becomes very common, there is the possibility that it is no longer noticed by consumers, and indeed is never questioned. This idea is, of course, a mainstay of Orwell’s 1984, and much subsequent science-fiction, and as applied to certain ideas and taboos, is central to Paul Graham’s classic ‘What You Can’t Say’ [83].
Nevertheless, in certain societies where products have incorporated restrictive architectures of control for a number of years, it is worth examining to what extent the restrictions have become ‘normalised’–Japan is the prime example, since, as Andreas Bovens notes:

“[many new] devices are first launched on the home market and distributed internationally at a later time. Thus, investigating Japan’s current technological landscape gives us an outlook on the content processing devices we might expect to appear in other markets within a short time frame.” [11] 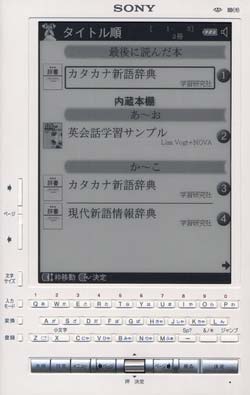 Books purchased for Sony’s LibriÃ© eBook reader expire after 60 days. Image from Wikipedia.
Sony’s LibriÃ© eBook reader, with extremely restrictive DRM (e.g., books stored are automatically locked up after two months, thus requiring re-purchase), has not proved popular on the Japanese market–partially, Bovens suggests, because there are (currently, at least) alternatives available which don’t feature the same architectures of control. However, the market for chaku-uta, mobile phone ‘ringtunes’ which are versions of the original tracks, has grown very quickly, even though they too are subject to restrictive DRM:

“heavily DRMed chaku-uta… downloads break all records; the same is true for mobile games: they are DRMed but nobody seems to care, even if it means they’ll have to buy them again when they switch to another cell phone [2.6 years on average].” [84]

As phones, music/game/video players and PDAs converge, it will be interesting to see whether a generation of children grows up believing it to be perfectly normal to lose all the content acquired each time the device is replaced–at an abstract level, will the mental boundaries of ‘what property is’ change? (This idea will be mentioned again in the ‘Some implications’ section).

Previous: Reactions from the technical community | Next: Consumers’ reactions to external control