It’s been a bit of a chaotic time recently, both in family terms and professionally, so my apologies for the lack of updates. In February I started as Visiting Research Tutor in Innovation Design Engineering (IDE) at the RCA, helping develop a programme of research and helping to supervise a group of excellent PhD researchers with a range of very interesting projects. IDE has one of the largest design research cohorts within the RCA, and I am looking forward to helping develop this further, in some new directions, through both academic and industry collaborations.
Part of this, from my point of view, will be reinvigorating and developing the Design & Behaviour Research Network which I started back in 2008, into something more substantial and which can build on other work such such as last year’s Creating Sustainable Innovation project. If you’re interested in collaborating, please get in touch. 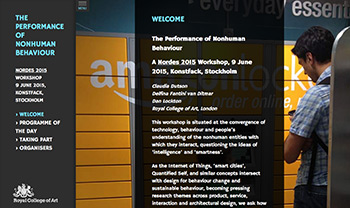 At Nordes 2015 at Konstfack in Stockholm in June, I will be running a workshop, The Performance of Nonhuman Behaviour, with Delfina Fantini van Ditmar (IDE PhD candidate) and Claudia Dutson (Architecture PhD candidate). My part of the workshop builds on many of the ideas explored in this blog over the years, around people’s understanding of the systems they interact with, and I’m hoping it will be a fun and useful event. More details in due course.

I’ll be blunt here: academic career prospects for what are termed “early career researchers” in the UK are not great, particularly in subjects which fall between the cracks of major research councils’ funding scope, and particularly at places like the RCA which don’t have any kind of staff development programme for researchers, and which depend heavily on “visiting” and part-time staff, often with no contract at all. My choices have been, essentially: 1) bring in enough funding to pay my own salary plus all of the overheads which universities require (which I have tried to do, and am trying to do, but which is very difficult starting from a near-zero base); 2) work on others’ projects on a series of short-term contracts, with little strategic input (which I don’t mind doing if I have to, but which is a step backwards); 3) leave and go somewhere with better support for early career staff. The RCA has some fantastic people, both students and staff, so I am trying option 1), as best I can, but I am aware that as an institution, it doesn’t try very hard to hold onto people.

In option 2) terms, working for the Helen Hamlyn Centre together with Vehicle Design at the RCA, I have temporarily (since January) also been project manager for setting up the public engagement work package of GATEway, an Â£8 million Innovate UK project looking at understanding and demonstrating driverless cars in the UK, led by TRL in conjunction with partners including the Royal Borough of Greenwich, Commonplace, and Shell. The introduction of new technology of this kind, the designed systems, services and infrastructure around it, and the potential effects on everything from urban planning to jobs, is fascinating, and I will be intrigued to see how the project develops and what it finds.

My job at the Helen Hamlyn Centre as part of the RCA’s role in SusLab has ended when the RCA’s funding ended, although I am still contributing to the project by supporting other partners in analysis and writing up of the results, and co-editing an academic book with Professor David Keyson and Dr Olivia Guerra Santin from TU Delft.
From the UK perspective, our book Drawing Energy, on which Flora Bowden has led, with myself, Clare Brass and Rama Gheerawo as co-authors, should be published in June this year by the Helen Hamlyn Centre. I’ll put more details on the SusLab at the RCA blog when they’re available. 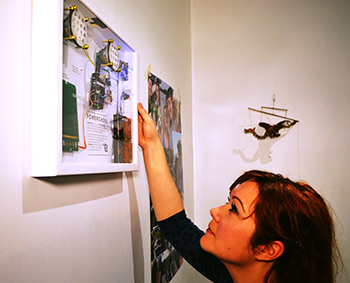 I am going to continue to work on Powerchord, the home energy sonification system, as a personal project. Being freed of the constraints of a major project ought to make this easier and faster, though of course without the benefit of funding. Claire Matthews has produced a brilliant range of sound schemes, and I’m hoping that a Mark II version of Powerchord using Jack Kelly’s approach to extracting CurrentCost/EDF individual appliance monitor data will prove more flexible than the previous approach. More news on this in due course.

In February, while I was en route to Munich to talk at the wonderful Hans Sauer Foundation Social Design Elevation Days, a PHP upgrade by the webhost, combined with a long outdated version of MediaWiki meant that the Design with Intent website became unusable (blank, basically). My botched attempt to fix it rapidly via FTP, hotspotting from my phone in an airport departure lounge, made things worse. So I have put up a temporary site which has most of the same content, but does not have individual pages for each pattern. Something better is on the way when I get a spare weekend…