The Cognitive Lens draws on research in behavioural economics and cognitive psychology looking at how people make decisions, and how this is affected by ‘heuristics’ and ‘biases’. If designers understand how users make interaction decisions, that knowledge can be used to influence interaction behaviour.
Equally, where users often make poor decisions, design can help counter this, although this risks the accusation of design becoming a tool of the ‘nanny state’ which ‘knows what’s best’.
Many dozens of cognitive biases and heuristics have been identified by psychologists and behavioural economists, a lot of which could potentially be applied to the design of products and services. The seven detailed below are some of the most commonly used; this selection draws heavily on the work of Robert Cialdini.

“What do other users like me do in this situation?”

â–  Users will often decide what to do based on what those around them do (the conformity bias), or how popular an option is; make use of this strategically to influence behaviours
â–  Social proof works especially well when there is a peer group or users identify with (or aspire to joining) the group against whose behaviour theirs is being compared; an element of competition can be intentionally introduced

Examples: Facebook’s ‘n of your friends added x application’ (above), Amazon’s various recommendation features, and statistics announcing the popularity of a particular website or product, such as the Feedburner ‘chicklet’ here all imply that ‘people like you are doing this, therefore you might want to as well’ 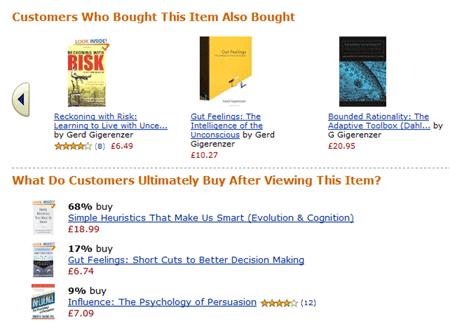 but can also enable a user to ‘know’ what to do, by making it easier to see how others are doing it.

â–  Present choices to a user in a way that ‘frames’ perceptions and so influences behaviour, e.g. framing energy saving as ‘saving you money’ rather than ‘saving the environment’; categorise functions strategically so that users perceive them as being related
â–  An obvious principle to many designers (and politicians, and estate agents); there are many possible framing tactics, such as use of language to give positive / negative associations to options (e.g. ‘sports suspension’ sounds better than ‘hard suspension’). Often used to deceive customers 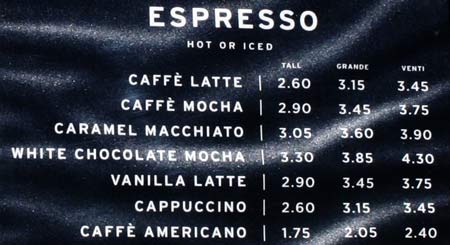 Examples: Starbucks’ drink sizes–at least on the menu (above)–start with ‘tall’, framing the implied range of sizes much further up the scale, to avoid any negative or mediocre implications that ‘small’ or ‘medium’ might have.
The ‘Knock-off Nigel’ anti-DVD-copying campaign (below) frames crimes against another person, such as theft of money, in the same bracket as downloading a movie, to imply that people who engage in one also engage in the other.

Framing is about motivating people to behave in particular ways.

â–  Users often feel obliged to return ‘favours’: design systems which encourage users to trade or share information or resources
â–  Can involve ‘guilting’ the user, but best if the user genuinely wants to return a favour

Example: This message from the BitTorrent client Azureus (now Vuze) encourages users to ‘reciprocate’ for having downloaded a file by continuing to seed it

“Stick to the plan”

â–  Get users to commit in some way to an idea or goal; they’re then more likely to behave in accordance with this to appear or feel ‘consistent’
â–  Can be used less ethically (e.g. the ‘irrational escalation of commitment’ involved in Swoopo) 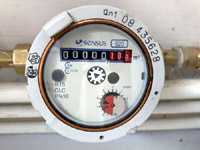 Example: Voluntarily choosing to have a water meter installed can demonstrate some commitment to reducing water, which may persist as a household tries to remain consistent with the commitment.

Example: Using smiling (or frowning) faces on customers’ electricity bills can increase the emotional response associated with the bill, and lead to (slight) reductions in electricity use. By comparing customers’ use to their neighbours, this strategy also made use of social proof

“She know’s what she’s doing”

â–  Many users will behave as suggested by an ‘authority figure’ or expert even if that behaviour is outside what they would consider normal; systems can be designed to make use of this effect
â–  At least three mechanisms at work here: ‘appeal to authority’ in terms of attitude / behaviour guidance, perceived threat to users who ‘disobey’ authoritative messages, and desire to become more like the ‘pros’ by imitation

Example: How much of Twitter’s success at engaging users to join and participate has been due to well-publicised ‘authority’ figures embracing it?

“Not much left, better use it wisely”

â–  Whether scarcity is real or not in a situation, if it’s perceived to be, users may value something more, and so alter their behaviour in response: design systems strategically to emphasise the scarcity of a resource
â–  Can be down to loss aversion; artificial scarcity can also be introduced (e.g. digital rights management)