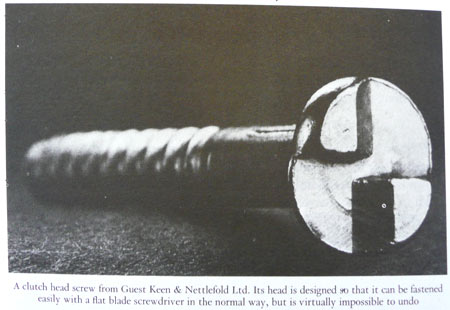 One-way screws, such as the above (image from Designing Against Vandalism, ed. Jane Sykes, The Design Council, London, 1979) are an interesting alternative to the usual array of tamper-proof ‘security fasteners’ (which usually require a special tool to fit and remove). There’s a very interesting illustrated listing of different systems here.
A fastener requiring a special tool is effectively addressing the “Access, use or occupation based on user characteristics” target behaviour – and is functionally equivalent to a ‘what you have’ security system such as a padlock, except that anyone can look at almost any engineering catalogue and buy whatever special tools are needed to undo most security fasteners, pretty cheaply and easily, whereas it’s still a bit more difficult to obtain padlock master keys.
However, this kind of one-way clutch head screw, which can be tightened with a normal flat screwdriver, but is very difficult to undo using any tool (without destroying it) can be thought of as addressing a slightly different target behaviour: this is “No access, use or occupation, in a specific manner, by any user”. Even if the original installer wants to undo the screw, he or she can’t do it without destroying it (e.g. drilling it out). A few of the other systems illustrated on the Security Fasteners website also have this property:

I’m particularly intrigued by the Shear Nuts and No Go enclosures (last two images above) – these two types effectively self-destruct/render themselves permanent as they are fixed into place. Something about this step-change in affordance fascinates me, but I’m not sure why exactly; it’s a similar idea to a computer program deleting itself, or Claude Shannon’s ‘Beautiful Machine’ existing only to switch itself off.
A step further would be a fastener or other device which (intentionally) destroys itself if the wrong tool (by implication an unauthorised user) tries to open/undo it, but which will undo perfectly well if the correct tool is used – along the lines of the cryptex in the Da Vinci Code, just as an ATM will retain a card if the wrong PIN is entered three times: it’s both tamper-evident and limits access. What other cryptex-style measures are there designed into products and systems?