Via Slashdot, a CNN story reports that:

Canadian auto regulators are testing a system that would enforce speed limits by making it harder to push down the car’s gas pedal once the speed limit is passed… [using] a global positioning satellite device installed in the car to monitor the car’s speed and position.

While the idea appeals to some road-safety experts, even the researcher in charge of the project admits many drivers–some of whom have shown fierce resistance to photo-radar and red-light cameras–may balk at the science-fiction scenario of a machine forcing them to apply the brakes. “We are trying to assess the operational acceptance issues,” said Peter Burns, chief of ergonomics and crash avoidance with Transport Canada’s road safety directorate.

As with the External Vehicle Speed Control system proposed in the UK, public acceptance comes up again as the major sticking point. It does make me wonder why, if legislators really are so enthusiastic about reducing speeding, new cars are not simply fitted with speed limiters as heavy goods vehicles are in many countries. I believe that in Germany, new cars are electronically limited to an absolute maximum of 155 mph, avoiding the extra complexity of GPS. Perhaps it’s a revenue issue? If an automatic fine can be issued every time the driver is detected speeding, as well as increasing the resistance on the pedal, then there’s an incentive to push for an external control system over mere preventative measures.

The project will also test the Otto Driving Companion, a less intrusive and commercially available system designed by Persentech, a Winnipeg firm. The dashboard-mounted device also uses GPS technology, but only warns drivers with a voice alarm and a light when they start to speed…Company president Frank Franczyk said…conscientious customers appreciate the blue speed-warning light and even the voice that warns them they are going too fast. Some say their children speak up when they see the alarm go off.
“They say, ‘Hey mom, the blue light’s on. Why are you speeding? 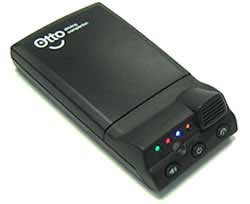 This is a lot more palatable–persuasive technology rather than an architecture of control. A precedent is the automatic pinging noise which a device fitted to Singaporean taxis produces if the vehicle exceeds the speed limit, discussed by Barry Nalebuff and Ian Ayres in the excellent Why Not? Nevertheless, as they note, it’s only one step from a warning light inside the car to a warning-light outside the car, which can easily be seen by the police, or other motorists, especially if that light latches, i.e. stays on even after the speeding has finished, to provide the ‘smoking gun’.
P.S. Apologies if this site seems to be focused too much on controlling speeding/vehicle tracking these last few days! It just seems to be in the news. The fact that Slashdot has to categorise the story in ‘Your Rights Online‘ is some kind of proof, at least, that there isn’t as yet a recognised terminology for these kinds of technologies. I’d like to think this site might change that.