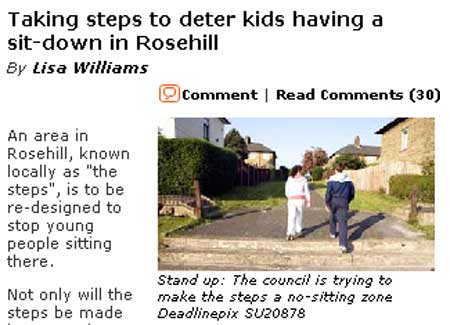 Adrian Short let me know about something going on in Sutton, Surrey, at the same time both fundamentally pathetic and indicative of the mindset of many public authorities in ‘dealing with’ emergent behaviour:

An area in Rosehill, known locally as “the steps”, is to be re-designed to stop young people sitting there.
Not only will the steps be made longer and more shallow to make them uncomfortable to sit on, but no handrail will be installed just in case teens decide to lean against it.
…
Explaining the need for the changes, St Helier Councillor David Callaghan said: “At the moment the steps are like ready-made seats so changes will be made to make the area less attractive to young people.

It’s well worth reading the readers’ comments, since – to many people’s apparent shock – Emma, a ‘young person’, actually read the article and responded with her thoughts and concerns, spurring the debate into what seems to be a microcosm of the attitudes, assumptions, prejudices and paranoia that define modern Britain’s schizophrenic attitude to its ‘young people’. The councillor quoted above responded too – near the bottom of the page – and Adrian’s demolition of his ‘understanding’ of young people is direct and eloquent:

One thing young people and older people have in common is a desire to be left alone to do their own thing, provided that they are not causing trouble to others. People like Emma and her friends are not. They do not want to be told that they can go to one place but not another. They do not want to be cajoled, corralled and organised by the state — they get enough of that at school. They certainly do not want to be disadvantaged as a group because those in charge — you — are unable to deal appropriately with a tiny minority of troublemakers in their midst.

EDIT: Adrian sends me a link to the council’s proposal [PDF, 55 kb] which contains a few real gems – as he puts it:

I really have no idea how they can write things like this with a straight face:
“It is normal practice to provide handrails to assist pedestrians. However, these have purposely been omitted from the proposals, as they could provide loiterers with something to lean against.”
and then,
“The scheme will cater for all sections of the local community.”