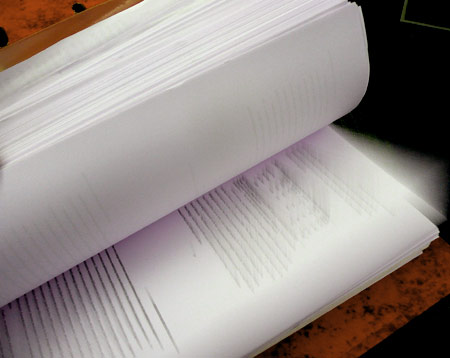 A lot of research is published each year.
Now that I’m a student again, I’ve got access (via Athens) to a vastly increased amount of academic journals, papers and so on. Far more than I could have done ‘legitimately’ without that Athens login, aside from travelling from library to library to library. And while it’s good for me to have that login, right at this moment, the necessity for such a login is hardly good for society as a whole. As an independent researcher, I simply could not keep on top of my subject properly.
I think it’s fairly clear that open access is the way to go, and certainly where research has enjoyed any degree of public funding there should be no case otherwise. But even where research is freely or easily available, its impact, as a result of limited exposure, is often also very limited or nonexistent, even within academia.
This is surely an omnipresent worry/headache/frustration for many researchers, and the issue was brought home to me the other day. I was reading a (fairly academic) book, published in the UK in 2005, written by a design professor at a university about 50 miles from here, and found a comment, within a discussion of a particular issue, along the lines of “no research has been done on the issue of to what extent A relates to B in the field of C, but it is safe to assume D” and yet, in front of me on the desk, was a PhD thesis completed in 2003, at my university, addressing not only the exact issue specified, but also showing D to be incorrect. Now, a paper was written based on this thesis, and published in an engineering journal, and also presented at a conference, but it clearly escaped the notice of the author of the book.
Now, of course, this probably happens a thousand times a day in academia. It’s not an especially interesting example, and there may be many possible explanations, the book maybe having taken a long period to go from being researched to publication being somewhat likely. But assuming it didn’t, and assuming the book’s author, despite being, by all accounts, an ‘expert’ in his field, really was unaware of research going on not too far away, then there is a failure of communication. (In this case, there might also be the often self-imposed disconnect between the ‘design’ community, and the ‘engineering’ community: the assumption that research done in a different field is irrelevant or likely not to be understandable. That, perhaps, is another problem again.)
This type of communication failure is not necessarily entirely the fault of either side, but it is a problem, across all fields of knowledge and endeavour. So what’s the answer?
I don’t know, from that kind of distance, but closer up, I have a hunch that broad subject blog families, such as Scienceblogs, ‘research digest’ blogs such as the British Psychological Society‘s, and individual blogs with a fairly wide scope, such as Mind Hacks (these latter two both examples from the same field) are going to become increasingly important mechanisms for disseminating research advances to both an academic and a wider audience. Whether the actual awareness of a particular new piece of research comes directly by a researcher reading the site, or by a colleague or friend-of-a-friend referring the researcher, the path from ignorance to awareness is (potentially) shorter and easier than before. It’s (potentially) less likely that anyone reasonably well-informed about a field will not have had an opportunity to learn about other research in the field, at least that which is either newly published or which somehow comes to the attention of the bloggers (so the bloggers’ filtering and discriminatory abilities are very important, in this sense).
Something I’m planning to do, on this blog, from now on, is to review useful or interesting academic papers or journal articles (or books, of course) I come across, from a variety of academic areas, which are relevant to the field of architectures of control, and design for behaviour change in general – shot through the lens of my PhD research focus, extracting pertinent arguments, quotes, following up references, and so on. I hope, in some small way, this will also bring particular areas of research to the attention of researchers from other disciplines, in the same way (for example) that Lawrence Lessig’s “code is law” concept made me think more about constraints and behaviour-shaping in product design in the first place.
From a practical point of view, this approach also seems like it might be a very useful way to document the process of getting to grips with the literature on a subject – helping immensely when it comes to putting together my actual literature review for the PhD – and allowing input (commentary, recommendations, suggestions) from a very diverse set of readers worldwide, in a way which the traditional ivory tower or even open-plan research office doesn’t, or can’t, at least during this stage of the research. While I’m sure there are plenty of other people who’ve had a similar idea (any links would be very interesting: I love seeing how other people structure their research), this approach seems quite excitingly fresh to me, imbuing the literature review process with a vibrancy and immediacy that simply wouldn’t have been as easy to do in the past.