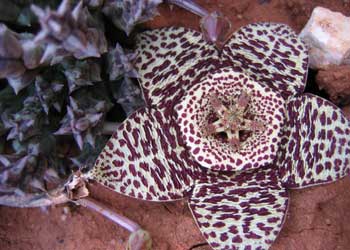 Images from Herman von Bon
Herman von Bon of the Soekershof Walkabout Maze & Botanical Gardens in South Africa lets me know about a pollination tactic used by some types of carrion flower, whereby they attract certain insects (by smell, and presumably markings), swallow them for a length of time and then release them again – a natural architecture of control, in effect, where the insect’s behaviour is restricted by the system which attracts it.
A digital analogy might, perhaps, be forcing a viewer to sit through adverts before watching a movie (e.g. by removing the fast-forward function), or simply a software registration/payment nag-screen. The user is lured in (by offering an attractive smell, or the promise of entertainment, or access to a desired function) and only released/allowed to proceed once a ‘toll’ has been extracted (pollen transfer, or eyeball-time).
Are there more ‘natural architectures of control’? What can we learn from them? Any examples would be very gratefully received.
(I don’t know how easily the carrion flower example sits with the classification of ‘intentions’ in designing controls into systems; until a few years ago, I always assumed that the term ‘intelligent design’ meant thoughtful, insightful, excellent product design, but that meaning seems to have rather fallen by the wayside.)
Off the control topic, but still on design, Soekershof Walkabout – which incidentally stirred the CIA’s interest a few years ago! – also have some beautiful solar umbrellas available to visitors:

“These umbrellas don’t flip up (aerodynamic design) and the user can manoeuvre them manually into the right sunprotective mode. The umbrellas are made of (re-used) galvanised wire, flexible pipe, irrigation pipe, bottle tips and fabrics. The fabrics are hand painted. We’ve just released them for sale (exclusively for our visitors). The photo shows you two of the test models (we’ve tested 17 prototypes during the past 2 yrs), The new improved ones still have to be photographed.
We’ve got several models: a butterfly, bird, elephant and cape cobra.” 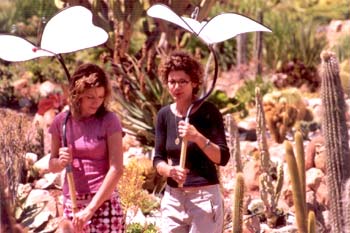 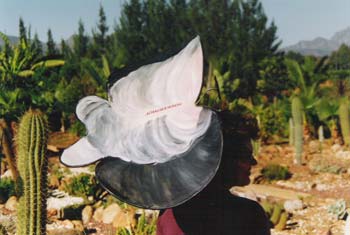