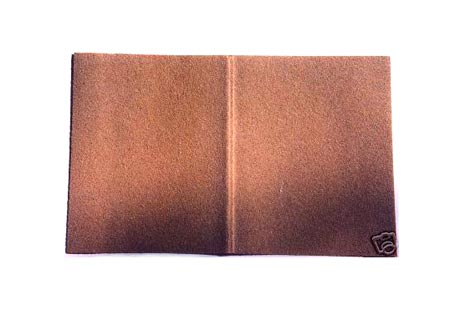 We can’t help but be familiar with the concept of ‘malicious code’ in the context of computer security and programming, but in general the idea of products or technology which, as they’re used, sabotage or degrade the performance of a ‘rival’, is intriguing and not well-explored. Scott Craver’s Underhanded C contest is a fascinating example from the ‘white hat’ side of the fence; Microsoft’s use of deliberately targeted style sheets on MSN.com to degrade Opera’s performance is another; and the CIA’s alleged planting of software bugs in Russian pipeline control software is a third. The Sony DRM rootkit might also fall into this category (as would this!)
But on a much more concrete level, we have this playful example: Memoires by Guy Debord, psychogeographer and Situationist, was originally published with a rough sandpaper cover:

Memoires was written, or rather assembled, by Guy Debord and Asger Jorn in 1957. Debord himself often referred to Memoires as an anti-book, and the original edition was bound in sandpaper, that it might destroy other books. The text is entirely composed of fragments taken from other texts: photographs, advertisements, comic strips, poetry, novels, philosophy, pornography, architectural diagrams, newspapers, military histories, wood block engravings, travel books, etc. Each page presents a collage of such materials connected or effaced by Jorn’s structures portantes, lines or amorphous painted shapes that mediate the relationships between the fragments.

(from an article by David Banash) 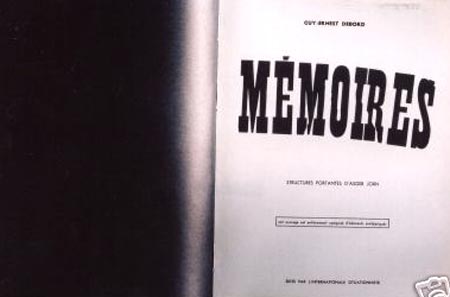 And from this article by Christian Nolle:

The book is most famous for its sandpaper cover. An auto-destruction feature that enabled it to damage not only the book it might be standing next to in the bookshelf, but also the person who would be reading it. An anti-book to destroy all other books.
Permild writes: “Long had he [Jorn] asked me, if I couldn’t find a unconventional material for the book cover. Preferably some sticky asphalt or perhaps glass wool. Kiddingly, he wanted, that by looking at people, you should be able to tell whether or not they had had the book in their hands. He acquiesced by my [Permild’s] final suggestion: sandpaper (flint) nr. 2: ‘Fine. Can you imagine the result when the book lies on a blank polished mahogany table, or when it’s inserted or taken out of the bookshelf. It plans shavings of the neighbours desert goat [?]’.
In all the literature that I have located, Debord is the person who is refered to as the inventor of the sandpaper cover. However, as it turns out Debord had nothing to do with it… Permild continues, Â«Asger loved – as he often expressed it, to place small time controlled bombsÂ». This was certainly a bomb. A bomb invented by the printer, whose job is normally of a technical nature. The sandpaper cover was a really good idea, but practically it never managed to practice what it preached. It did, however, make its readers conscious about handling it or where to place it.
One the other hand, Memoires placed itself on a shelf among precious object, something to be handled with great care… The American Hakem Bey did something similar in the 1970s. In homage to Guy Debord, Bey made a book with sandpaper on the inside. This way he rendered the book into auto-destruct mode if you would ever dare to read it. A potential bomb to go off if you would open it. Memoires, on other hand is a bomb, not a potential bomb. No matter how you would handle it, there was always the danger that it could damage your precious collection of 1920s French poetry.

The photos above come from this French eBay listing – the copy on sale reached â‚¬3,810.