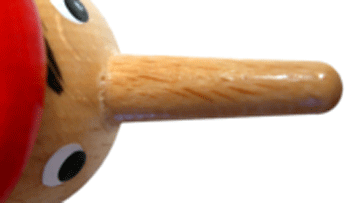 Image from News Sniffer
News Sniffer‘s Revisionista monitors alterations to published news stories from a variety of sources by comparing RSS feeds, sometimes revealing subsequently redacted information or changes of opinion (e.g. note the removed phrase in the first paragraph of this story about Cuba). While many of the changes are simply re-wordings for clarity or to correct grammatical errors, there are certainly also some instances of more substantial revisions – see the ‘recommended’ list.
Perhaps more revealing is News Sniffer’s Watch Your Mouth, which shows the reactively moderated comments removed from the BBC’s ‘Have Your Say’ threads. I’ve been reading this for a while – in fact I think I might have been one of the first subscribers via Bloglines – and am still amazed by just how many comments are removed by the BBC’s moderators, often making points which, though maybe controversial, are very much the voice of the common man and woman. Some are offensive, yes; others are genuine expressions of frustration or even first-hand annotations to or clarifications of aspects of the story above. Many are critical of the BBC, including those criticising the moderators for censorship of the very comments under dicsussion.

For many people in the UK, the BBC’s ‘Have Your Say’ is a first exposure to the concept of social media: their first experience of having their views and opinions directly shown to other users and being able to repsond to others’ opinions. Having such censorship in place may ‘tidy up’ the appearance of the site from the BBC’s point of view, and prevent arguments developing in the comments, but I feel that laying itself open to such (accurate) accusations of censorship will not be in the BBC’s best interests in the longer term. The BBC’s reaction to News Sniffer largely glosses over the ‘Watch Your Mouth’ section, which is a shame.
(When I was a teenager, I used to spend a lot of time listening to Talk Radio, and its successor, talkSPORT, even if only in the background while working. I knew the callers’ and presenters’ views weren’t representative of the population as a whole, but there was something intensely interesting about really being in touch with what (some) people were saying around the kitchen table, or in the pub. The views weren’t always informed, but there was a lot of common sense and frank opinion which rarely came across in other media available at the time (pre-fast Internet access). To some extent I see Watch Your Mouth as a kind of successor to that: the opinions that slip down, or are forced down, the back of the sofa, brought out into the open once more, whether idiotic or incisive.)
Is this relevant to architectures of control? I think so, even if only tangentially. News Sniffer is a fightback device against a formalised system of censorship, using simple, open technology (RSS) to break the control imposed by censors.