This post is the start of a series that will only be of interest to a few readers, but it’s about a subject that means a lot to me, and about a place which, in one way or another, has had an impact on design, and design education, in the UK and beyond. Brunel University has just sold its Runnymede campus to Oracle Residential, part of the Epsom-based Oracle Group, a property and investment company.

Oracle’s announcement on its website, under ‘Latest acquisitions’ (it’s Flash-based and unlinkable) is a little more detailed than Brunel’s rather terse statement – even if it skirts the issue of what they’re going to do with the place – and at least recognises some of what’s interesting about it:

Acting on behalf of oversees investors, Oracle Residential are pleased to confirm the acquisition of the Brunel University Runnymede Campus for Â£46.5m. Situated on the outskirts of Egham town centre, the 67 acres of mature parkland and woods is currently occupied by Royal Holloway, University of London for student accommodation. The site currently contains around 350,000 sq ft of buildings, some of which are listed.
With far reaching views of Windsor Castle, the site has extensive grounds which include an Area of Landscape Importance, Ancient Woodland and a Site of Nature Conservation Importance – all of which will need to be protected in any development proposals for the site.
Regional Director Scott Hammond believes that the site’s significance in terms of nature conservation and historical importance means that any proposals would need to be of a highly sensitive nature; Â“once occupation of the building is secured in September, we will begin the process of restoring some of the dilapidated and unsightly buildings, and seek to enhance the Green Belt nature of the siteÂ”.
King Sturge acted for the University in the disposal of the site.

I was a student at Runnymede from 2000-4, and a member of the last graduating year to be based there. Runnymede – once the Royal Indian Engineering College, and later Shoreditch College – was Brunel’s design school: a self-contained, single-subject campus out on its own, on top of Cooper’s Hill, Englefield Green – the first piece of high ground to the west of central London, with views over Heathrow and the Staines Reservoirs as well as Windsor Castle, Magna Carta Island and the Thames. It was a very interesting place to be a student, in many ways: there was enforced isolation, but we could call it ‘hothousing’; there was clearly never much money for buying new equipment, but there was a pride in using what was there to produce astonishing results; there was a lot of stress, but also proof of the total miscibility of work and play. And indeed workshop and kitchen, swarf and carpet, spray-booth and corridor, daytime and nighttime.
I know that to a large extent, I fell in love with the location before I really ‘got’ the course; the Open Day I attended, in June 1999, was sunny and beautiful, and the whole place struck me (and still strikes me) as one of the most perfect places in south-east England: a hilltop idyll with Elizabethan oak trees and Victorian parkland, yet close enough to the lure of London. Certainly many of the student halls of residence were decaying, but no more so than many, many others. The Royal Holloway students living there at present are right to complain about the place not being up to what they had been led to expect, but from what my girlfriend tells me of some of the (now demolished) halls at Holloway, Runnymede wasn’t that bad. 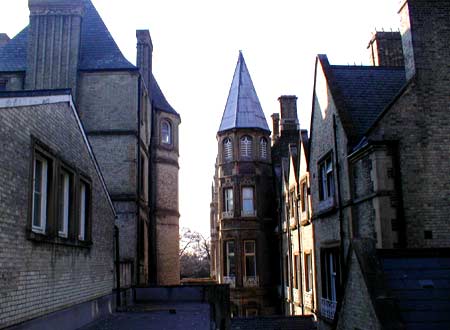 Of course it is much, much too late now to dwell on the decision to move the Design department to Uxbridge – one of the seemingly few concrete [sic.] decisions made about Runnymede during Brunel’s 27-year tenure of the site, since absorbing Shoreditch College in 1980. The department is merged into the School of Engineering & Design, it’s a very different set-up, they’ve taken me on to do a PhD, and I’m very pleased about that.
As for Runnymede – even in the early 1990s (gleaned from reading old documents in the library) there were proposals for selling the campus to various other organisations, such as an independent schools’ association (to use as an HQ), and in the last few years, suggested uses included temporary housing for Heathrow Terminal 5 workers, a new ‘Brunel Academy’ for underprivileged inner-city teenagers, a conference centre, a permanent expansion for Royal Holloway (both teaching and accommodation), and an administrative HQ for Brunel itself, away from the construction-site hubbub of Uxbridge. But in the end, it came down to this: sale to a property company, just as Brunel did with its (equally historic) Osterley and Twickenham. I don’t know (yet) what Oracle’s plans are: I do know that Englefield Green has a lot of executive homes and apartments already and surely doesn’t need too many more.
This is the first in a series of posts looking at some of the history of the Runnymede campus, both long past and recent, the plans for the site as they become clearer, and how it will all affect the local area. I intend to do some research in that vein, and report back semi-regularly. In the meantime, some photos of the campus: from ‘Hostler’ (2001), part 1; part 2; and some of my own, from 2004, in no real order. 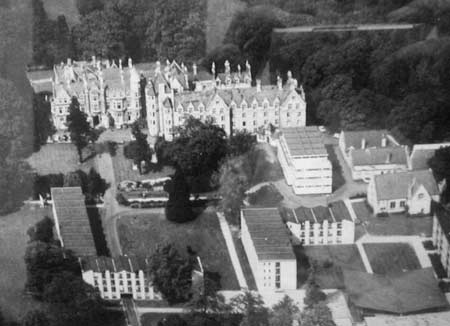