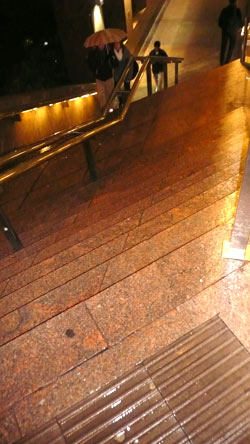 It’s a simple question, really, to any readers with experience in urban planning and specifying architectural features: what is the reasoning behind positioning steps at an angle such as this set (left and below) leading down to the Queen’s Walk near London Bridge station?
Obviously one reason is to connect two walkways that are offset slightly where there is no space to have a perpendicular set of steps, but are they ever used strategically? They’re much more difficult to run down or up than conventionally perpendicular steps, which would seem like it might help constrain escaping thieves, or make it less likely that people will be able to run from one walkway to another without slowing down and watching their step.
Like the configuration of spiral staircases in mediaeval castles to favour a defender running down the steps anticlockwise, holding a sword in his right hand, over the attacker running up to meet him (e.g. as described here), the way that town marketplaces were often built with pinch points at each end to make it more difficult for animals (or thieves) to escape, or even the ‘enforced reverence’ effect of the very steep steps at Ta Keo in Cambodia, are angled steps and staircases ever specified deliberately with this intent? 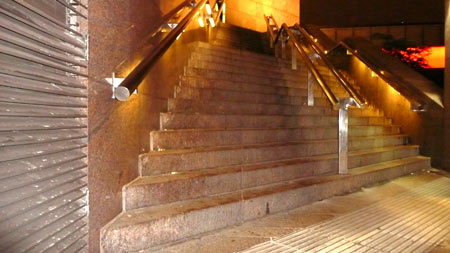 The first time I thought of this was confronting these steps (below) leading from the shopping centre next to Waverley Station in Edinburgh a couple of years ago: they seemed purpose-built to slow fleeing shoplifters, but I did consider that it might just be my tendency to see everything with a ‘Design with Intent’ bias – a kind of conspiracy bias, ascribing to design intent that which is perhaps more likely to be due to situational factors (a kind of fundamental attribution error for design), or inferring the intention behind a design by looking at its results!
What’s your angle on the steps? 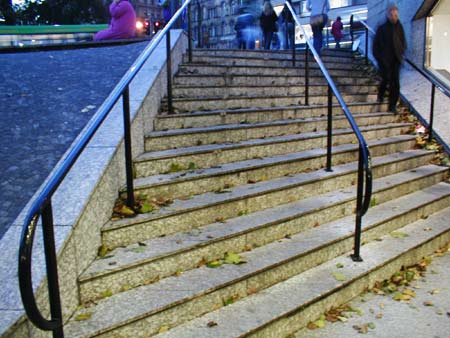