Three student projects on show at Made in Brunel earlier this month took the idea of moving the function of a water meter to the tap (faucet) itself, to act as a ‘speedometer‘ and thus encourage users to reduce their water usage (or wastage). The three projects, while similar, have slightly different emphases: 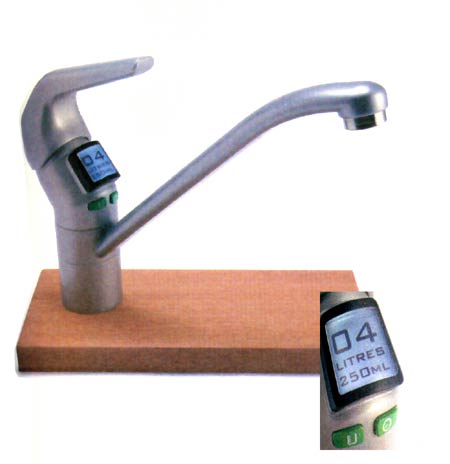 Henry Ellis-Paul’s Tap Meter, above, which was also exhbited at the Ideal Home Show, shows the user the amount of water used in that particular instance. As he says, “this information changes the user’s habits and behaviour through involvement and emotional attachment to the product” – it could also presumably be used to measure out the amount of water used for recipes or to ensure that we each drink the right amount each day. 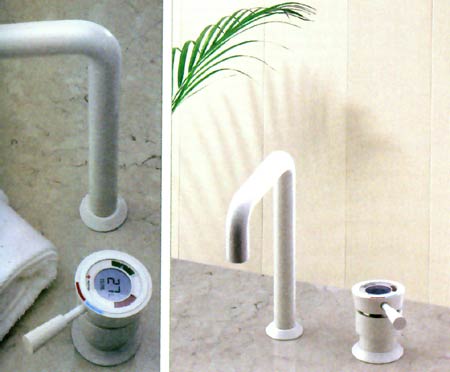 Stefan Grosvenor’s Water and energy saving tap (above) additionally addresses electricity usage due to hot water, combining both water and electricity usage in an ‘equation’ to make users more aware of the total impact they have each time they turn the tap. The project was intended as a future concept for the Red Cross, to be used as part of a campaign which would “both help others less fortunate, as well as educating users with their potential.” 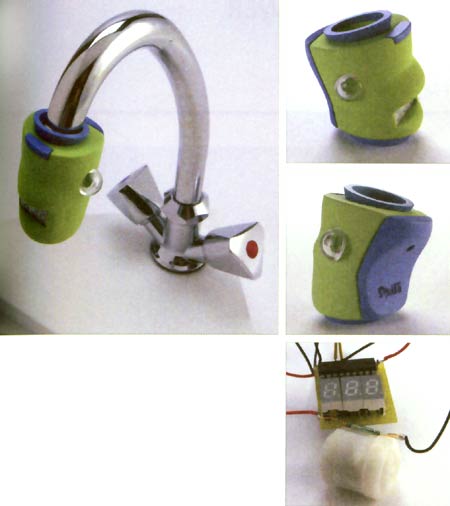 Meghana Vaidyanathan’s Squirt (above) is specifically intended for children, hence the bright colours and anthropomorphism of the design:

At our current consumption rate, it is predicted that we could use up to 40% more water in the next 20 years. Squirt is an awareness-based water meter designed for children aged 3 to 6 and aims to instil conservational etiquette in the mind of a child. Squirt has a child-friendly interface and displays the amount of water consumed over a period of time from the tap to which it is attached.

The term “conservational etiquette” is interesting – how easy is it to instil a social constraint of this kind in western societies where the resource is (apparently, at least) in abundance? Most of us have a conservational etiquette regarding money, and thus many ‘speedometer’-type devices – such as Wattson – incorporate a display translating the energy usage into its financial consequences.
This could, of course, go further – as Crosbie Fitch comments,

[Car] fuel economy would probably be greatly improved if there was a UI that could simulate the consumptive clink of a particular denomination of coin (at the users’ choice).

I’m not sure how many owners of gas guzzlers would like to enable the sounding of a cash register ding each time 10 pence worth of fuel had been consumed.
Just imagine the cacophony whenever the Chelsea tractor driver uses kick-down.