Meagan Call has written a very interesting piece examining the technique used in some (women’s) public restrooms* of moving the mirrors to the wall near the entrance/exit, rather than behind the sinks as might be expected (and is usually found in mens’ facilities), to lessen queueing and speed up throughflow: 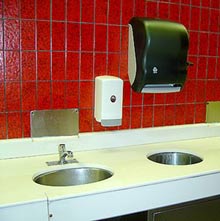 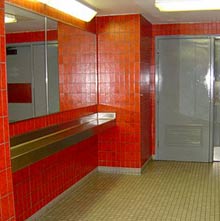 Women often linger, using the excess water from their recently scrubbed hands to squish, flatten, and fluff their hair. I’ve seen women who don’t bother to wash their hands bend over the sinks to play with their hair or re-touch makeup. And of course, some women go into the restroom for the sole purpose of looking into the mirror. No mirror equals less congestion, people washing their hands can get to the sinks more easily, and will leave more quickly.
…
Moving the mirror near the doors is actually an intelligent solution… by moving the mirrors away from the water, primping is less desirable. In addition, by placing it in the pathway of the door, people are more likely to feel foolish and in the way, and are therefore more likely to pass by quickly. The open space does not invite people to stay and look in the mirror.

Meagan’s analysis is spot-on – this is a clever technique which is subtle enough not to be noticed by the majority of users, but which nevertheless shapes their behaviour. The agenda is one of social benefit (for the greater good of the other users, reducing congestion) rather than explicitly commercial (in the context of the service area where the facilities are located), but it presumably has the effect of reducing complaints, hence increasing customer satisfaction even if only marginally.
We’ve looked before at some of the issues around mirrors in a retail environment, but in a confirmation/corollary of Meagan’s thoughts, I’ll end with two pertinent quotes:

Stand and watch what happens at any reflective surface – we preen like chimps, men and women alike… Mirrors slow shoppers in their tracks, a very good idea for whatever merchandise happens to be in the vicinity.

Paco Underhill, Why We Buy.

A large hotel in an American city received many complaints about the slowness of its elevators. It installed mirrors next to the elevator doors. The complaints ended.

Lawrence Lessig, Code and Other Laws of Cyberspace
………..
*/bathrooms/toilets/conveniences/other
Photos from Meagan Call.