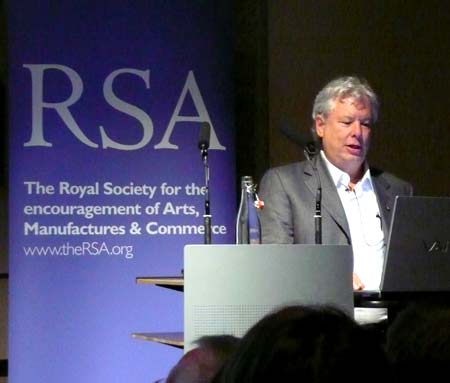 Richard Thaler, co-author of Nudge (which is extremely relevant to the Design with Intent research), gave a talk at the RSA in London today, and, though only mentioned briefly, he clearly drew the links between design and behaviour change. Some notes/quotes I scribbled down:

There were lots of interesting questions in not much time, but I asked, rather too convolutedly, to what extent he thought that making clear to people the longer-term implications of choices, e.g. when choosing a pension (which, in interaction design, is effectively feedforward as defined by Tom Djajadiningrat) was really likely to be persuasive, given the biases people have around valuing future gains/losses (ir)rationally. He said that devices such as the Ambient Orb (covered here last year) seemed to have a significant effect on people’s energy use, and if combined with immediate feedback (BJ Fogg‘s kairos?) which was difficult to ignore (such as playing an irritating piece of music), could be very successful.
The LSE’s Professor Julian Le Grand also spoke briefly about the relevance of behavioural economics/’Nudge’-type thinking to health policy, including his controversial opt-in ‘smoking licence’ proposal. The implication was that social marketing techniques and better health education simply aren’t enough to persuade people to change their behaviour: an architectural change is needed:

We don’t need to provide more information on smoking. There can’t be anyone on the planet who doesn’t know it’s harmful. 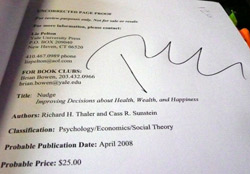 There was a signing afterwards, and I think I unintentionally upset/offended Thaler slightly by presenting the advance proof copy I’d obtained (and heavily annotated). Certainly, he wondered where I got it and didn’t seem especially pleased to learn that copies had been available online before the book was even released in the UK; his mark on the page was made with some force and I’m not sure that it was the right moment to hand him a leaflet about our Design for Sustainable Behaviour research! [PDF]
Still, the signed proof of Nudge might be worth something one day.
P.S. The Nudge blog is well worth a regular read, with some eagle-eyed reporting of new behaviour studies and readers’ suggestions.
P.P.S. Another recent book addressing cognitive biases, irrationality, behavioural economics and their importance in different situations is Sway, by Ori and Rom Brafman (many thanks to Sebastian Deterding for letting me know about this). It’s an interesting book – extremely readable, and quick to read – and has some great anecdotes and examples. Thrown in the mix along with Dan Ariely’s Predictably Irrational, it fills in a few gaps. Of the three books, I’ll admit I got the most out of Nudge, primarily because it actually suggests applications of the cognitive bias effects elaborated, on a scale that neither of the other books really do.