Last year we looked at the way that the pricing structure of no-change-given ticket machines is often – apparently – designed to lead to overpayment, and I posed the question of whether councils/car park operators actually draw up their budget based on a significant proportion of customers overpaying. 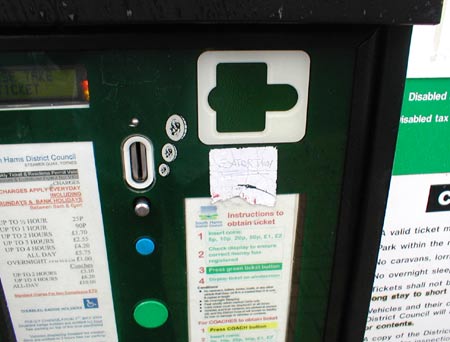 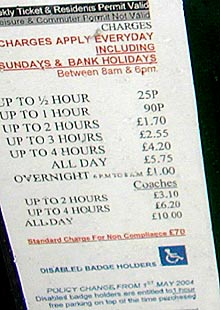 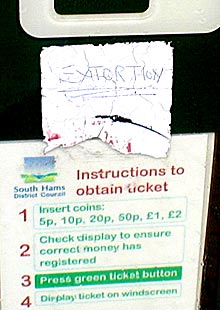 I’m still no closer to answering that last question, but I was reminded again of this ‘the house always wins’ idea last week by this ticket machine (above) in Totnes, Devon. Look at the price intervals: 25p, 90p, Â£1.70, Â£2.55, Â£4.20, Â£5.75 – those are some rather odd figures. The price jumps – 65p, 80p, 85p, Â£1.65 and Â£1.55 – are odd in themselves, but given that the machine does not give change, it’s a fairly safe bet that,unless they carry a lot of change, many people parking for 1 hour will pay Â£1.00 rather than 90p, many 2 hour customers will pay Â£2 instead of Â£1.70, and many 3 hour customers will pay some amount larger than the very awkward Â£2.55. Why not Â£2.50? What’s the logic behind that extra 5p if not to force overpayment by people not carrying a spare fivepence?
One car park visitor was clearly sufficiently irritated to label the machine with exactly what he or she thought of the pricing policy (third photo above)! 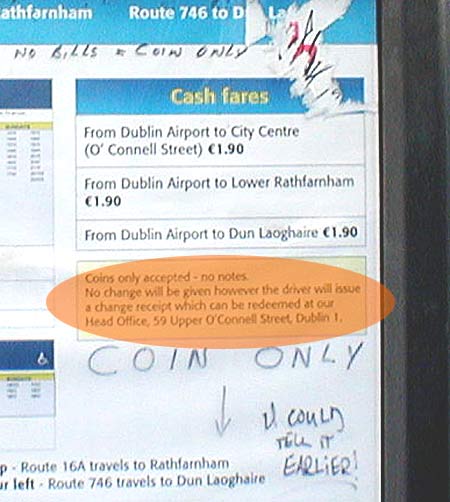 An interesting case: Dublin Bus
One detail which was thrown up in the comments last time by Undulattice is that at least one no-change-given policy, that of Dublin Bus, is accompanied by the ability to get a refund if you really want, by taking your receipt to Dublin Bus’s headquarters (which are at least located in a fairly prominent place in the city centre), as explained on signs such as the above (photographed at Dublin Airport earlier this year):

Dublin Bus have operated an ‘Exact Fare – No Change’ policy for years now. In the case of over-payment, they issue a ticket receipt which can be exchanged at Dublin Bus HQ.
Oh, and they don’t accept notes either!

and Damien added this:

I can’t remember which one, but there was a charity in Dublin that started collecting the Bus refund receipts and cashing them as donations. Great idea.

The Jack and Jill Children’s Foundation, St Francis Hospice and Barnardos are among the charities actively asking for the receipts – as Barnardos says:

Did it ever occur to you that you are throwing away real money — and lots of it!
As much as â‚¬750,000 a year is going into rubbish bins across the county!!
In 2004 there were over 150 million passenger journeys on Dublin Bus routes right across the city. If ONLY 1% of those journeys were over—paid by 5c that’s a total of â‚¬750,000 that often ends up in the bins!

This forum discussion from 2004 suggests (how accurately, I don’t know) that Dublin Bus has more than â‚¬9 million in unreturned change. As with the car parking overpayments, how do accounting standards deal with this kind of overpayment arrangement? Can budgets be drawn up based on projections of massive overpayments along these lines? Are there businesses (bus companies, car parks, etc) that are only profitable because of the scale of overpayment? Some forum posts suggest that drivers may pocket and redeem a lot of the receipts themselves, which may further complicate the picture further.
The charity initiatives are a fascinating way to ‘fight the system’ and achieve some good – a mechanism for recovering overpayment en masse – and it does make me wonder just how much overpayment Transport for London’s bus ticket machines receive each year, and how that money is accounted for.
A different strategy
Back to parking ticket machines, Carrie McLaren of the brilliant Stay Free! commented that:

…in New York, like most major cities in the US, parking meters are priced way below their market value – so “the house always wins” claim wouldn’t apply here. Anyone able to find a metered spot is getting a real bargain, even if they don’t have the right change.

This is an interesting strategy, very different to that used by most car parking operations in the UK. Restricting the number of spaces and not deliberately overcharging for them seems to be clearly targeted at discouraging drivers from even thinking of driving into the city, while not ripping off those who need to do so. This generally does not happen in the UK, where parking charges (and fines) are a major revenue source for councils and private operators, and while high charges (and forcing overpayment) may pay lip-service to ‘discouraging traffic’, the still-full car parks would tend to show up that this does not work. I’ll look further at this, and ‘architecture of control’ strategies for parking, in a future post.