Ann Thorpe, author of the intriguing-sounding Designer’s Atlas of Sustainability – is pursuing an interesting investigation into design activism: 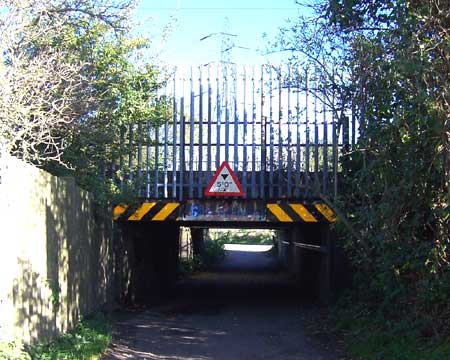 Low bridge in the Lee Valley, East London. Photo by sarflondondunc.
As part of this, she’s put together a very insightful article, well worth a read, Can artefacts be activists?, reviewing some of the different approaches in this area, from Langdon Winner’s discussion of Robert Moses’ low parkway bridges, to this very website:

…[O]nce designers are out of the picture, have moved on to the next job, can artifacts in themselves be activists? Can buildings, appliances, tools, or items of clothing, in themselves, lobby for change or even “force” it?

There are some worthwhile areas of debate explored in the article, especially the extent to which an artefact can embody power or discriminate, in itself, rather than simply mediating this through the way it is used or experienced. I appreciate this argument, but (coming from the point of view of a designer), I think the intent behind a design feature is critical to understanding the issue. If a bridge is intentionally made low to prevent buses passing underneath, this may well have the same practical effect as one which is simply low through an accident of history or topography, but it displays a very different attitude and philosophy on the part of the planners. Unintended consequences of design decisions – made long before products (/systems/environments) reach users – certainly have an enormous effect on almost all human-technology interactions, but not so many are actually deliberate. No design is neutral; all artefacts embody some intent, some philosophy, some outlook, even if it’s simply “manufacture this as cheaply as possible”. All design is rhetoric, a communication of values and intentions, and can be read as a social text if that’s the way you like to think of it, but with some design, those intentions are much more obviously expressed.
I look forward to seeing how Ann’s research develops – this is a very interesting area which should probably be given more attention in design school curricula in the years ahead. As more young designers “tire of designing landfill” (can’t remember if Ben Wilson first used this phrase to me, or me to him), design activism, of one form or another, is the most meaningful route forward.