Following on from Part 1, here are a couple more very interesting student projects linking design and behaviour. This time, both involve providing feedback on the impact or costs of everyday behaviours in order to get people to think.
Tim Holley’s Tio project, developed in response to a brief by Onzo, and described as ‘A Light Switch to Help Children Save Energy’ – deservedly won the HSBC Sustainability Prize at the Made in Brunel show: 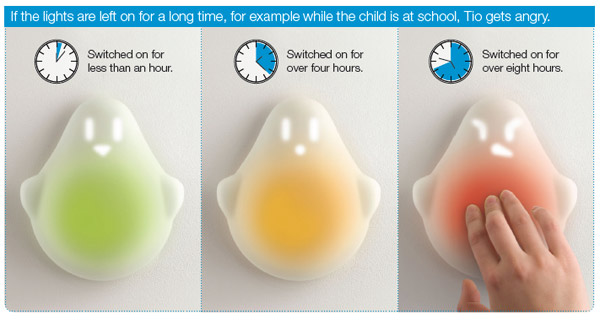 “Children play a key role in reducing energy consumption due to the fact that they will be among the key decision-makers in the next 30 years. A simple way to engage and educate them is to concentrate on lighting, which accounts for up to 15% of electricity use in the home. The target market for Tio is 7-11 year-olds. This coincides with a period in primary education during which children begin to learn about the environment, energy and the effects that humans are having on the world. Tio […]allow[s] children to demonstrate their knowledge of energy conservation to their family and encourage their role as ‘energy champions’ of the home. Tio has the potential to reduce lighting-use by up to 25%, resulting in an energy saving of up to 11% over a five year period… 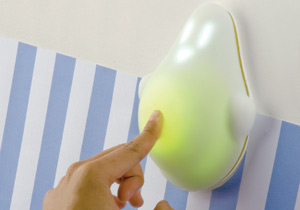 The wall-mounted light switch[…] controls the lighting in the child’s room. Tio is soft and tactile, thus encourages user interaction. The character of ‘Tio’ displayed on the light switch encourages children to turn their lights off: Tio is happy when the lights have only been on for a short period of time. The longer they are left on, the angrier he becomes. This acts as an emotional reminder to turn the lights off…
The recommended ‘lights-on time’ is influenced by the child’s age, their daily activities and the time of day. […] Information (‘lights-on’ time) is sent wirelessly from the wall switch to a computer. The computer programme allows the child to track their lighting-use performance over an extended period of time. The child takes care of a ‘virtual tree’ by moderating their lighting-use performance. This engages children to make a personal contribution to reducing energy consumption.”

There are some clever ideas in there, including pester-power (“Make sure your parents turn off their lights too”) and, from a Design with Intent toolkit point of view, some of the patterns you might be able to identify include affective engagement, self-monitoring, material properties and metaphors. There’s some neat product detailing too, such as the way Tio’s expressions are formed by different patterns of LEDs being illuminated under the translucent case.
Tim was a very useful and insightful tester of an earlier version of the Design with Intent toolkit back in autumn 2008 (as part of the pilot study reported in this co-authored paper [direct PDF link]) so it’s great to see his project get such recognition. He’s now working for Onzo in product R&D strategy and has some exciting and ambitious plans for the future: as a very talented young designer bringing together creative user-centred design and technology expertise with an eye for business strategy, I’m sure Tim will go far. 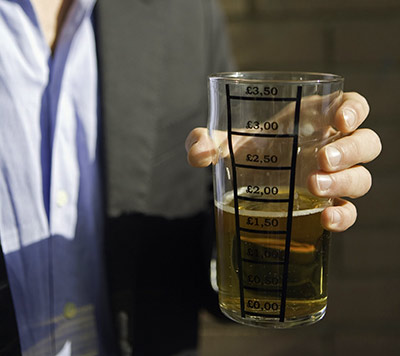 Across London at Goldsmiths, Alexander Kirchmann’s ‘Lehman’s Inheritance’ project aims “to create and design products, that can help an individual to manage the [economic] crisis” such as this pint glass with cost markings (right). As Alexander puts it, “my products are the inheritance of the crash… By exposing people to their spending and also to their earnings my design is saving the owner money.”
This is an incredibly simple project (at least the example that’s illustrated – I’d be interested to know what other products Alexander modified / created). But the impact of exposing costs in this way – self-monitoring without any special equipment – could be very effective. In some of the recent workshops I’ve run with designers and students, similarly low-tech feedback concepts have been suggested for problems such as reducing water wastage (sinks with scales marked on them) and reducing overfilling of electric kettles.
More projects coming up in Part 3.
Images from the websites linked.