Norwich City Council is introducing a system of parking permit charges determined by the length of the vehicle:

The move away from flat-fee permits will penalise drivers who own vehicles more than 4.45 metres (14Â½ft) in length, such as the Vauxhall Vectra.
Brian Morrey, vice-chairman of the Norwich Highways Agency Committee, a joint initiative between the city council and Norfolk County Council, said: “We want to encourage more people to drive smaller cars. It is far more environmentally friendly and would also generate more parking space on the roads.”

(Quote from the Times; image from the Daily Mail) 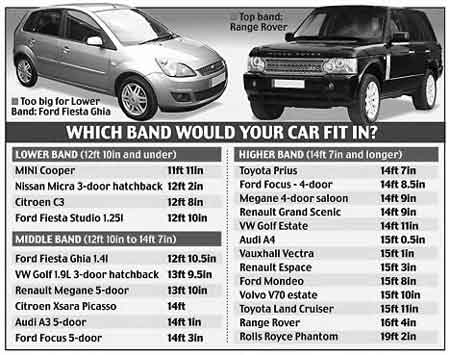 Media reactions have largely been negative, with the measure being seen as a stealth tax, penalising larger families with larger vehicles, and so on; even the Green Party’s SiÃ¢n Berry (London mayoral candidate and anti-4 × 4 activist) criticised the measure on the BBC News this morning for not being linked to the cars’ CO2 emissions.
Nevertheless, from a ‘design with intent’ point of view, this is an interesting strategy. The Council is clearly addressing the problem which it perceives – too many large cars in a city with “narrow, mediaeval” streets, rather than the ‘wider’ problem of CO2, and it’s addressing it directly, by making it less desirable to own a larger vehicle in Norwich if you’re going to park it on the street. Whether that’s ethical, sensible, or anything else is another matter: there are always unexpected consequences, and if, for example, more people decided to lay tarmac over their front gardens to avoid having to pay to park on the road outside, the impact of the permit costs might be felt long after the price had been forgotten (much like the window tax). While legal/economic/policy mechanisms for changing user behaviour, such as fines and permits, are perhaps outside the usual purview of ‘design with intent’, the idea here is still relevant: it’s a rather rare example of a direct response to a problem, and it – potentially – has that ‘trimtab‘ characteristic that is so fascinating about certain solutions.
An obvious physical-psychological mechanism analogous to the permit pricing structure might be to construct city car parks and parking spaces so that there were only a few spaces long/wide enough to take larger vehicles (making this very obvious), thus adding a little extra inconvenience every time a driver of a larger vehicle wants to park. Over time, that thin end of the inconvenience wedge might have an effect, even if it simply means that when the owner comes to replace the car, he or she thinks “Driving a big car’s so inconvenient nowadays; I’ll get something smaller.” On a large scale, those small decisions can have a significant impact. Has this been done anywhere?