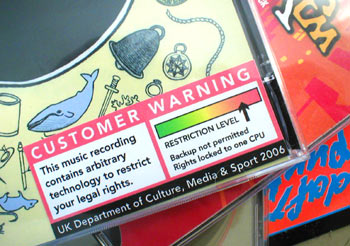 A warning label mockup*
The BBC is reporting that the All Party Internet Group (APIG), a cross-party group of MPs, has made some intelligent – and interesting – recommendations about explaining DRM more fully to consumers:

“The MPs’ report made several recommendations and called on the Office of Fair Trading hasten the introduction of labelling regulations that would let people know what they can do with music and movies they buy online or offline.
This would ensure that it was “crystal clear” to consumers what freedom they have to use the content they are purchasing and what would happen if they do something outlawed by the protection system.
The same labelling systems would also spell out what happened in the event of a maker of DRM technology going bust, if a protection system became obsolete or if gadgets to play the content are replaced.

…
The report also called for the makers of DRM systems to be made aware of the consequences of using aggressive copy protection systems [e.g. the Sony-BMG nightmare].”

I wonder what the proposed labelling system will entail? Will it be very simple, or will it need to spell out to consumers the rights the law gives them in order to them point out how this particular DRM’d CD or download is restricting them?
In short, do we need a programme of educating consumers about their rights before a labelling system will be useful?
The Open Rights Group‘s Suw Charman is quoted in the BBC story:

“”The technologies are extending beyond the law they are supposed to uphold.”
…
She said that DRM was less about protecting copyright and more about creating a system in which people rent rather than own the media they spend money on.
“We think people rightly feel that once they buy something, it stays bought,” she said.”

APIG’s group secretary is the Earl of Erroll, an insightful quote of whose I blogged about a few months ago. It’s worth repeating in this context, as APIG’s work here goes some way to remedying the problem he highlights:

“If no members of either house know anything about IT, then bureaucrats will take control of our lives, or pretend they can do things they can’t.”

Hopefully APIG can continue their work in educating politicians, as well as the public, about the implications of restrictive technology.
*Not owning any DRM’d music, I used a recent CD purchase, the excellent Great Days of Sail (now Yo Zushi) album, for the mockup image. An alternative style of label might be those distributed by Downhill Battle and RIAA Radar: 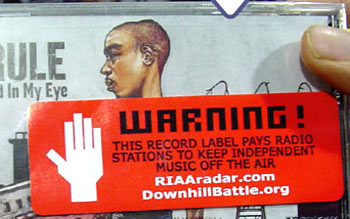