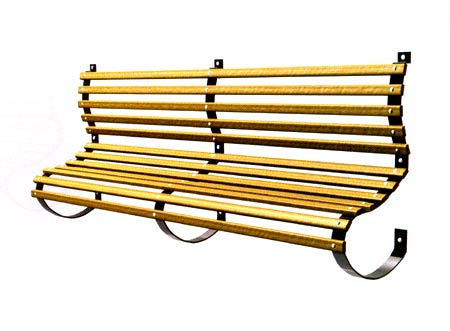 Image from a flyer by Joscelyn Bingham.
The Lean Seat bench, by Joscelyn Bingham, a graduating 3D Design student from University College Falmouth, is a ‘traditionally’ styled slatted wooden alternative to the (usually) unattractive anti-sit perches often found in public places. Note: the surface of the seat is very definitely tilted, and while the slats certainly increase the frictional effect, you perch on it rather than actually sit.
Displayed at New Designers in London last week, it was interesting to see that the rationale behind the project, as explained on the accompanying boards, specifically mentioned “discouraging longer-term stays” as a feature of the design. You couldn’t lie down on this bench; you couldn’t put anything down next to you (such as your lunch, or a child with tired legs) either. However, the rationale also explained how this kind of seating angle can be of anatomical benefit (along the lines of kneeling stools, perhaps), and, as Rich Lafferty pointed out before when we looked at deliberately uncomfortable public seating, for many, especially older people, a perch-type seat can provide a few minutes’ welcome respite without the often difficult task of lowering and raising oneself into and from a fully seated position.
I’m not averse to the provision of perch-type seats and benches. They clearly have their uses, and many users will prefer them: I know I’d often rather semi-perch on the padded bulkheads on tube trains when only going a few stops, than find a seat. But where there is no alternative, and proper benches or other seats are cynically removed or entirely replaced with perches, I don’t like it.