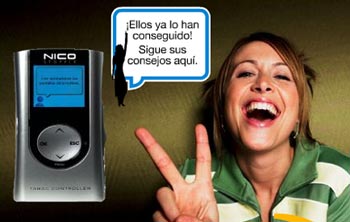 Images from nicostopper.com and Popgadget
Nicostopper is an electronic dispenser which holds up to 10 cigarettes, and releases them one at a time at programmed intervals, to help pace and restrict the smoker. The screen “will also flash “self-help” messages each time to make you feel guilty as well” (Popgadget). It’s styled fairly discreetly to look similar to a portable music player or phone – the resemblance is accentuated in the photo above right with the extended cigarette in the position of the aerial – presumably so the user will be more likely to feel at home using it in public and social situations.
This is an interesting product, attempting to affect a user’s behaviour to reduce consumption rather than increase it as with so many other architectures of control. Indeed, smoking could well be seen as a battle between two attempts to control/influence users’ behaviour, with vast sums spent on advertising and methods both to promote the practice, and to encourage smokers to give up. We’ve looked before at cigarettes as a parasitic lock-in method, especially in the context of increasing nicotine levels to compound addiction*.
Of course, a device such as Nicostopper does not stop the user asking a friend or someone else for a cigarette, nor indeed taking a full packet along in addition. The actual strength of control is fairly low. The user really must want to control his or her habit, and be determined to do so, otherwise there is no point in buying the device. Even the significant commitment shown by buying Nicostopper, and the expense of it, may help the user to take more control of the situation, and there’s also the factor that, as Uber Review puts it:

If that doesn’t stop you from smoking at least you will have $300 less to spend on smokes after you pay for the device.

I recently mentioned Lee Iacocca’s quote on rationalising major purchases – to the extent that spending $300 on a Nicostopper is a major purchase, this may increase its effectiveness, at least for the first few months, since the user feels guilty about spending $300 on the product, and is thus more committed actually to using it, even if only to justify it to friends and family. Like exercise bikes and home gym equipment abandoned a few months after Christmas, the Nicostopper may ultimately fail in a large percentage of users’ attempts to change their own behaviour, but will surely succeed in some cases.
Interestingly, Ross Anderson comments, at Popgadget:

I distinctly remember hearing, about 30 years ago, that the then Soviet ruler Leonid Brezhnev owned such a device that had been specially built to his specifications.

This is confirmed here by John Negroponte…

He had a problem with his smoking. I remember he couldn’t control smoking either, he had a little machine, little cigarette box, with a timer on it that was only allowed to open every so many minutes, so that he wouldn’t smoke to many cigarettes.

Brezhnev customarily works late at the Kremlin, sometimes has difficulty sleeping without a sedative. To cut down on his smoking, he is trying a time-lock cigarette case (made in France, he thinks) which opens only after a preset number of minutes or hours has passed. “Yesterday,” Brezhnev told L’HumanitÃ©, “I smoked only 17 cigarettes.”

Of course, simply having a smaller standard cigarette case with space for only a few cigarettes might have much the same effect as devices with timers, etc. As with packaging/serving sizes, the quantity which we expect to consume can be affected by the way it’s presented. Maybe smaller cigarettes – getting a little bit smaller each year – would have a gradual effect of lessening dependence on the chemical content of the product, but not on the physical addiction to picking up a cigarette, lighting it, etc.
*As my brother commented, tobacco companies may increase the nicotine, but they don’t increase the tar: a parasite doesn’t want to kill its host.