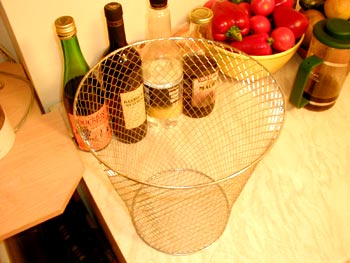 From McGazz (who also has some great music to listen to on his website):

“As I was getting myself a cup of tea in work this morning, I overheard a colleague talking about a problem at the tanning salon his wife runs. Each cubicle has a bin in it, and a regular customer has apparently taken to vomiting and urinating in it (the guy reckoned the tannee in question might be bulimic).
I suggested he get round the problem by using wire mesh bins. While he was chuffed with this idea, I’m slightly worried that I managed to devise an ‘architecture of control’ after only a few seconds thought. I must have authoritarian tendencies…”

This is a clever, non-invasive, psychological deterrent to the undesirable behaviour. I wouldn’t call it authoritarian: it’s guiding behaviour without outright control. This is good design.
The closest parallel example I can think of is the use of cone-shaped paper cups for water-coolers (see image below left): besides being simpler & cheaper to make than flat-bottomed cups, people (generally) have a much lower tendency to leave them lying around once they’re empty. The psychological resistance to leaving the cup on its side (since it can’t stand up on its own) on the table, in case that last drip of water leaks out, is – oddly perhaps – fairly high. Especially when in company, people just don’t do it, whereas they’ll happily leave empty coffee cups and screwed-up cake wrappers on the tables. (I spent a lot of time in the Judge Business School, in Cambridge, where the Common Room – below right – had a water cooler using cone cups. It was rare to find them left on the tables, but common to find other litter.)

How could this type of design thinking be used in more situations to guide people into better behaviour? Littering seems an obvious theme to target, but also perhaps energy waste? Can devices which show us our energy usage in real time, such as the Wattson, really change people’s behaviour, or is it better to embarrass them into change? Roadside CO2-readers which flash up to you (and other drivers) just how much damage you’re doing to the environment?