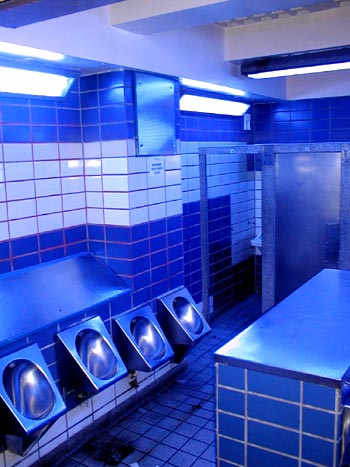 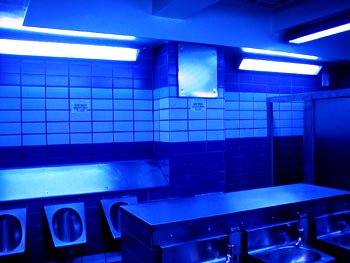 Blue lighting is sometimes used in public toilets (restrooms) to make it more difficult for drug users to inject themselves (veins are harder to see). The above implementation is in Edinburgh, next to the Tron Kirk.
It was more difficult to see my veins through my skin, but there was normal-coloured lighting in the street outside, and one would assume that the users would thus just go outside instead, though the risk of detection is greater. (An additional result of the blue lighting is that, on going outside after spending more than a few seconds in the toilets, the daytime world appears much brighter and more optimistic, even on an overcast day: could retail designers or others make use of this effect? Do they already?)
So the blue lighting ‘works’, but is it really a good idea to increase the risk that an injection will be done wrongly – maybe multiple times? This is perhaps a similar argument to that surrounding delibrately reducing visibility at junctions: the architecture of control makes it more dangerous for the few users (and those their actions affect) who ignore or bypass the control. This seems to be an architecture of control with the potential to endanger life, although the actual stated intention behind it probably includes ‘saving lives’.
Without knowing more about addiction, however, I can’t say whether making it difficult for people to inject will really help stop them doing it; it would seem more likely that (as in the linked Argus story), the aim of the blue lighting is to move the ‘problem’ somewhere else rather than actually ‘solve’ it – as with the anti-homeless benches, in fact.
Another example in this kind of area is the use of smoke alarms specifically to prevent people smoking in toilets, e.g. on aeroplanes (the noise, and embarrassment, is a sufficient deterrent). There’s even been the suggestion of using the Mosquito high-pitched alarm coupled to a smoke detector to ‘prevent’ children smoking in school toilets (I’d expect that quite a few would deliberately try to set them off; I know I would have as a kid). A friend mentioned the practice of siting smoking shelters a long way from office buildings so that smokers are discouraged from going so often; this backfired for the company concerned, as smokers just took increasingly long breaks to make it ‘worth their while’ to walk the extra distance.