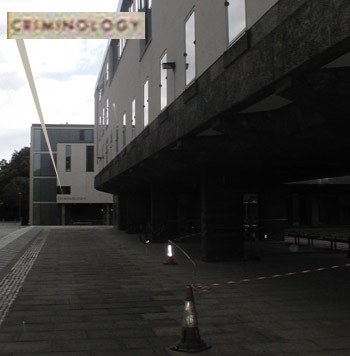 Bruce Schneier talks about ‘Architecture and Security’: architectural decisions based on the immediate fear of certain threats (e.g. car bombs, rioters) continuing to affect users of the buildings long afterwards. And he makes the connexion to architectures of control outside of the built environment, too:

“The same thing can be seen in cyberspace as well. In his book, Code and Other Laws of Cyberspace, Lawrence Lessig describes how decisions about technological infrastructure — the architecture of the internet — become embedded and then impracticable to change. Whether it’s technologies to prevent file copying, limit anonymity, record our digital habits for later investigation or reduce interoperability and strengthen monopoly positions, once technologies based on these security concerns become standard it will take decades to undo them.
It’s dangerously shortsighted to make architectural decisions based on the threat of the moment without regard to the long-term consequences of those decisions.”

Indeed.
The commenters detail a fantastic array of ‘disciplinary architecture‘ examples, including:

I’m especially amused by the “making it painful for hippies to walk barefoot” comment! This is not too far from the anti-skateboarding corrugation sometimes used (e.g. the third photo here), though it seems that in our current era, there is a more obvious disconnect between ‘security’ architecture (which may also involve vast surveillance or everyware networks, such as the City of London’s Ring of Steel) and that aimed at stopping ‘anti-social’ behaviour, such as homeless people sleeping, skateboarders, or just young people congregating.