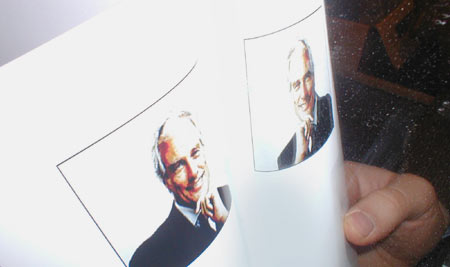 This is an interesting story. Robert Kilroy-Silk (above) currently an independent MEP, has raised the issue in the European Parliament of intentionally distorting mirrors in clothes stores, specifically Marks & Spencer:

Marks and Spencer has said it is mystified by a claim by MEP Robert Kilroy-Silk that it uses “distorting” mirrors in its changing rooms.
Mr Kilroy-Silk has accused the store of misleading women with mirrors that make them look slimmer in its clothes.
He made the allegation in a written question in the European Parliament.
An M&S spokesman said: “Our mirrors are perfectly normal, standard mirrors. We are at a loss as to what he might be referring to.”
In his question, Mr Kilroy-Silk asked if it was “conceivable that within the millions of EU regulations covering virtually every aspect of life in the EU” there was not one that made it illegal for M&S to have mirrors that “deliberately distort women’s shapes”.

Now, whatever you might think of Kilroy, and M&S’s denial, it’s surely not that unlikely that intentionally distorting mirrors have been, and probably are, used in some shops, and maybe some homes too. (As the distorting M&S mirrors are apparently in the Windsor and Maidenhead stores, which are pretty local to me, I should probably go and check.) Do cosmetic surgery clinics ever have a different set of mirrors on the way in to those on the way out?
If, when designing a retail environment, you could a) increase sales and b) make customers feel better about themselves by using a ‘slimming’ mirror, why wouldn’t you? How ethical is this? It’s an underhand method of persuasion rather than physical control, but it could make a significant difference to sales, in the process making shoppers feel more positive, even if ultimately it’s deceitful. Hewlett-Packard already produces digital cameras with a ‘slimming’ mode. If it helps you modify your self-image, and you like that, then I’m not sure it’s unethical per se. It’s just part of the great embedded architecture of delusion that fuels modern consumerism. Vanity sizing – another method of persuasion in clothes retailing – is an additional aspect of this.
Mirrors are a useful persuasion and control tool for retail designers anyway, whether distorting or not. People stop or slow down when they encounter them. Sometimes it’s vanity; sometimes it’s simply useful for people to see how they look. As Paco Underhill says in the excellent Why We Buy:

Stand and watch what happens at any reflective surface – we preen like chimps, men and women alike… Mirrors slow shoppers in their tracks, a very good idea for whatever merchandise happens to be in the vicinity.

And, of course, Lawrence Lessig actually mentions the use of mirrors in an ‘architecture of control’ example, in the chapter ‘What things regulate’ of Code and Other Laws of Cyberspace:

A large hotel in an American city received many complaints about the slowness of its elevators. It installed mirrors next to the elevator doors. The complaints ended.

What other uses of mirrors, or vanity devices/techniques in general, can be designed into environments to affect consumer behaviour?