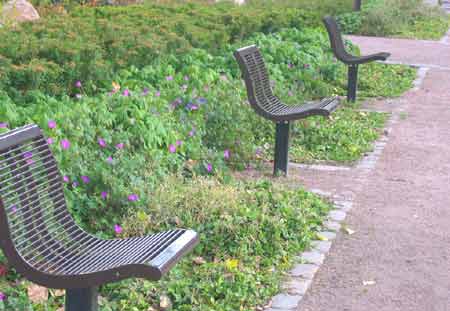 Single-occupancy benches in Helsinki. Photo by Ville Tikkanen
Ville Tikkanen of Salient Feature points us to the “asocial design” of these single-person benches installed in Helsinki, Finland. In true Jan Chipchase style, he invites us to think about the affordances offered:

As you can see, the benches are located a few meters away from each other and staring at the same direction. What kind of sociality do particular product and service features afford and what not?

Comments on Ville’s photo on Flickr make it clear that preventing the homeless lying down is seen as one of the reasons behind the design (as we’ve seen in so many other cases). 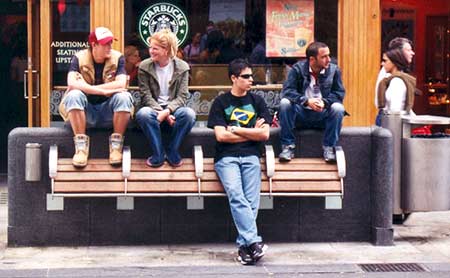 The street finds its own uses for things. Photo from Stephanie Jenkins
Ted Dewan – the man behind Oxford’s intriguing Roadwitch project, which I will get round to covering at some point – pointed me to a fantastic photo of the vehemently anti-user seating in Oxford’s Cornmarket Street, which was covered on the blog last year. When I saw the seating, no-one was using it (not surprising, though to be fair, it was raining), but the above photo demonstrates very clearly what a pathetic conceit the attempt to restrict users’ sitting down was.
As Ted puts it, these are:

The world’s most expensive, ugly, and deliberately uncomfortable benches… Still, people have managed to figure out how to sit on them, although not the way the ‘designers’ expected. They might as well have written “Oxford wishes you would kindly piss off” on the pavement.

Benches in Oxford’s Cornmarket Street will now cost taxpayers Â£240,000 – and many have been designed to discourage people from sitting on them for a long time… the bill for the benches – dubbed “tombstones” by former Lord Mayor of Oxford Gill Sanders — has hit Â£240,000.
…
The seats, made of granite, timber and stainless steel, are due to be unveiled next week but shoppers wanting to take the weight off their feet could be disappointed, because they will only be able to sit properly on 24 of the 64 seats. There is a space for a wheelchair in each of the eight blocks, while the other 32 seats are curved and are only meant to be “perched” on for a short time… Mr Cook [Oxford City planning] said the public backed the design when consultation took place two years ago. He added: “There’s method in our madness. We did not want to provide clear, long benches both sides because we did not want drunks lying across them.”
But a city guide said the council had forgotten the purpose of seating. Jane Curran, 56… said: “When people see these seats and how much they cost, they are going to be amazed.
“They look like an interesting design, but seats are for people to sit on… the real function of a seat has been forgotten.”
Mrs Sanders, city councillor for Littlemore, said: “I said time and again that the council should rethink the design, because I don’t think it’s appropriate for Cornmarket. People who need a rest if they’re carrying heavy shopping need to be able to sit down. If they can’t sit on half the seats it’s an incredible waste of money.”
David Robertson, the county executive member for transport, said: “They have been designed so that the homeless will not be able to use them as a bed for the night.” 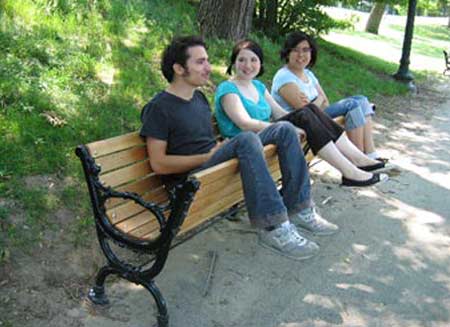 Matthew Hincman’s ‘bench object’ installed at Jamaica Pond, Boston, Mass. Photo from WBUR website
Following last week’s post on the ‘Lean Seat’, John Curran let me know about the ‘bench object’ installation by sculptor Matthew Hincman. This was installed in a Boston park without any permission from the authorities, removed and then reinstated (for a while, at least) after the Boston Arts Commission and Parks Commission were impressed by the craftsmanship, thoughtfulness and safety of the piece.
While this is probably not Hincman’s intention, the deliberately ‘unsittable’ nature of the piece is not too much beyond some of the thinking we’ve seen displayed with real benches. 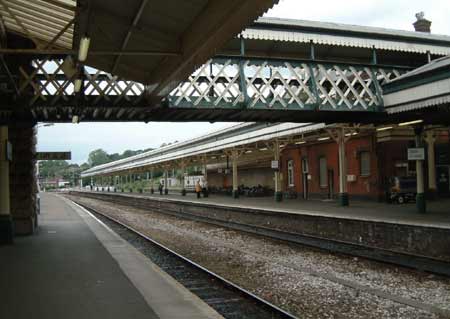 There are no longer any indoor seats available without having to sit in the cafÃ©, and the toilets are beyond the ticket barrier. So if you’re there waiting for someone off a late train, after the cafe has closed, you can only sit outside the building, and have no access to the toilet facilities (unless a ticket inspector on the barrier feels kind).
…
[First Great Western] are currently doing their best to discourage people from just hanging around waiting at Exeter St Davids. The recent introduction of barriers there (due to massive amounts of fare dodging on the local trains) has created a simply awful space.
…
If you take a look at the stats, FGW has lost over 5% points for customer satisfaction with their facilities in the last 6 months – I wonder why!

Waiting outdoors for late-night trains, with the cold wind howling through the station, is never pleasant anywhere, but I seem to remember St Davids being especially windy (south-south-west to north-north-east orientation). This kind of tactic (removing seats) might not be deliberate, but if it isn’t, it demonstrates a real lack of customer insight or appreciation. Neither reason is admirable.
UPDATE: Mags has posted photos (slideshow) of the recent changes at Exeter St Davids, along with notes – which also show other poor thinking by First Great Western, alongside the obvious removal-of-seating: 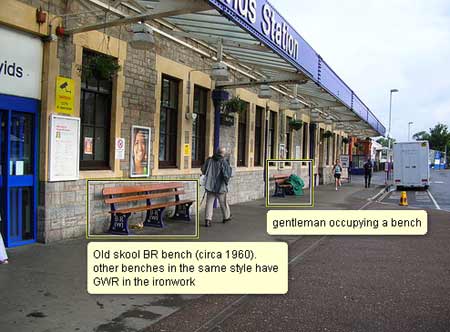 This is the only seating freely available at Exeter St Davids if you do not have a ticket (i.e. if you are waiting for someone). Note that one of the two benches is delightfully occupied. 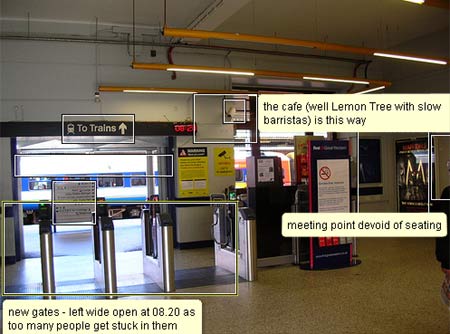 Exeter St David’s no longer has any freely accessible indoor seating. This is the view of the increasingly encroached concourse area where you can wait for people. The only toilets are beyond the barriers. 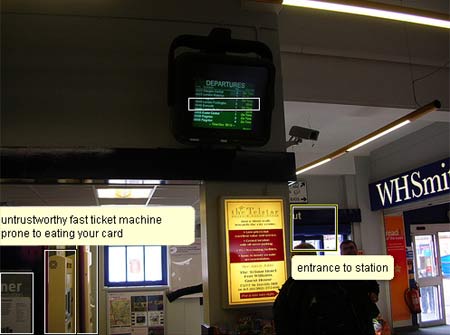 Having walked into the main concourse, you have to turn 180 degrees in order to see the departures screen, then 180 degrees back to go through the gates.

What an attractive meeting point!