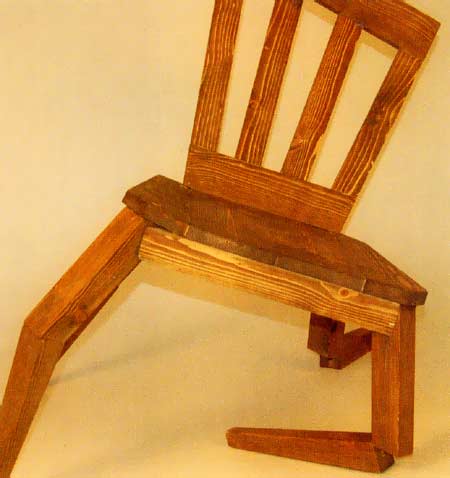 Design and Punishment, by Ben Cunningham. Photo from the Arts Institute at Bournemouth‘s 2007 Three Dimensional Design graduate directory.
Very neatly linking the themes of the last two posts (devices to make users aware of their energy use, and intentionally uncomfortable seating) is the Design and Punishment chair by Ben Cunningham, a Three Dimensional Design graduate from the Arts Institute at Bournemouth.
Simply, the concept is a chair which progressively collapses as the user’s home energy use becomes excessive, and restores itself when corrective action is taken (such as turning devices off):

Chairs are designed to support a person’s weight: this is taken for granted, but what if that feature were taken away from the user until they have done their bit? This is a way of forcefully highlighting the issue, so they cannot ignore it any more.

The idea is for a range of products with similar ideas – one of Ben’s lecturers, Christian McLening, also mentioned to me the idea of a light cord that retracts gradually the more energy is used, and a bookshelf that similarly tilts gradually. The light cord sounds intriguing, but by making the cord more difficult to reach (to turn it off), it perhaps signifies the opposite of what’s intended. Along the lines of what Crosbie Fitch suggested here, lights which gradually dimmed as the house’s energy consumption increased might be an interesting alternative. But Ben’s aim was very much to play with the ‘punishment’ aspect:

Design and Punishment was, to begin with, a look at designing a product that could make saving energy in the home easier through better awareness. The products force the user to cut down on their energy consumption. Instead of trying to make energy saving easier, the range of products forces the user to save [energy] or suffer a punishment.

Again, the line between forcing the user (physically) to behave in a certain way, and persuading him or her to change behaviour, is not a distinct one; as Toby commented here, both are methods of control, and both are powerful, but in cases such as this where the user would have to choose to purchase the chair voluntarily (Ben’s chair is only a concept product, but the principle stands), the persuasion/coercion would be two/three-pronged: inspiring the purchase in the first place/motivating the user to use it where more convenient alternatives are available, and the actual forcing aspect when the user’s behaviour is changed, rather than the product being abandoned in frustration/annoyance.