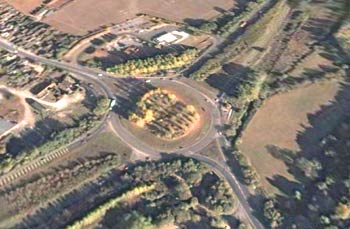 An increasing trend among road planners in the UK is the use of fencing, hedges or banks deliberately to reduce visibility at certain junctions, especially roundabouts (traffic circles), presumably with the intention of forcing drivers approaching a roundabout to slow almost to a standstill every time, even if the roundabout is empty. This SABRE thread has some interesting examples and discussion of individual cases (including the Countess Roundabout on the A303 – above image from Google Earth*).
I can understand the safety reasoning – and this genuinely is an architecture of control with intended social benefit – but in many places where it’s applied, I believe it to be flawed. One of the main features of roundabouts as originally introduced was that they allowed non-discriminatory free flow to any traffic which was unopposed, i.e. if nothing’s coming from the right (UK) you can proceed without actually having to halt: all roads meeting at a roundabout have to give way to whoever’s already on the roundabout. It’s the ultimate in both deference and empowerment.
By removing drivers’ ability to respond by assessing what’s happening up ahead, you reduce the amount of information available, which apart from sheer frustration, must in many cases have deleterious safety implications.
For example, I drive a low car with a relatively long bonnet. If there’s anything in a lane to my right when waiting at a roundabout, I already either have to wait until that has gone, or nose out gradually, just in order to see what’s coming and whether or not I can proceed. It’s awkward and I don’t like it. Adding high fences to the central reservation forces that situation on every driver.
As ‘PeterA5145’ notes in the SABRE discussion:

“…improving sightlines generally tends to reduce collisions at junctions. You wouldn’t deliberately engineer a road with lots of blind turnings just to make people take more care, would you?
It is nonsense to assert that slower automatically means safer.”

*This image is probably from before the fencing was put up – if anyone has a more recent one showing the fences, please let me know!