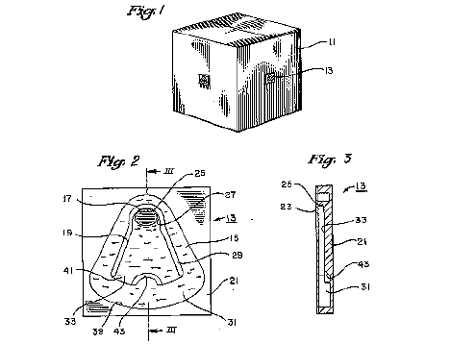 A tilt-detector from this 1984 US patent, with intended application on a packing box.
The liquid detection stickers in mobile phones, which allow manufacturers and retailers to ascertain if a phone has got wet, and thus reject warranty claims (whether judiciously/appropriately or not), seem to be concerning a lot of people worldwide. Around a quarter of this site’s visitors are searching for information on this subject, and the comments on last October’s post on the subject contain a wealth of useful experience and advice.
This current thread on uk.legal.moderated goes into more depth on the issue, and how the burden of proof works in this case (at least in the UK). While informed opinion seems to be that the stickers will only change colour when actual liquid is present within the phone, rather than mere moisture or damp, this may well include condensation forming within the casing, as well as the more obvious dropping-of-phone-into-puddle and so on. The main point of contention seems to be that the sticker may change colour (perhaps gradually) and the phone continue working perfectly, but when an unrelated problem occurs and the phone is taken in for repairs under warranty, the presence of the ‘voided’ sticker may be used as a universal warranty get-out even if the actual problem is something different.
Tilt detection
Along these lines, one of the posts tells of a similarly interesting design tactic – tilt-detectors on larger hardware:

30 years in the IT industry and associated customer service tells me they are trying it on and most people buy it. In the olden days, hardware used to come with a similar red dot system indicating the kit had been tilted more than 45 degrees and the manufacturers claimed the kit could not be installed and had to be written off.
Of course, 99.9% of the time the kit was fine, but they had a get-out from a warranty claim or so they thought. When the buyers tried to claim on their insurance or against the transport companies insurers the loss adjusters got involved and invariably the kit was installed and worked fine for years rather than the insurers paying out.

In some cases, of course, tilt-detectors were (are still?) necessary in this role. A piece of equipment with multiple vertically cantilevered PCBs laden with heavy components – relays, for example – might well be damaged if the PCBs were tilted away from the vertical. Certainly some devices with small moving coil components would seem as though they may be damaged by being turned upside down, for example. (Do the ultra-fine damper wires on an aperture-grille CRT monitor such as a Trinitron need to be kept in a particular orientation when handling the monitor?)
This patent, published in 1984, from which the above images were extracted, describes an especially clever ‘interlock’ system using two liquid-based detectors arranged so that if the device/package is tilted and then tilted back again, the second detector will then be triggered:

…it is desirable that the tilt detectors not be resettable. In particular, it must be possible to combine a package with at least a pair of the tilt detectors such that attempting to reset one would cause the other to be tilted beyond its pre-determined maximum angle so that the total combination would always afford an indication that the tilt beyond that allowed had been effected.

This is something of a poka-yoke – but as with the phone liquid-detection stickers, it’s being used to detect undesirable customer/handler behaviour rather than actually to prevent it happening. Other than making a package too heavy to tilt, I am not sure exactly how we might design something which actually prevents the tilting problem, aside from rectifying the design problem which makes tilting a problem in the first place (even filling the airspace in the case with non-conductive, low-density foam might help here).
But there’s certainly a way the tilt-detector could be improved to help and inform the handler rather than simply ‘condemn’ the device. For example, it could let out an audible alarm if the package or device is tilted, say, 20 degrees, to allow the handler to rectify his or her mistake before reaching the damaging 45 degrees, whilst still permanently changing colour if 45 degrees is reached. In the long run, it would probably help educated users about how to handle the device rather than just ‘punishing’ them for an infraction. I’m sure that mercury-switch (or whatever the current non-toxic equivalent is) alarms have been used in this way (e.g. on a vending machine), but how often are they used to help the user rather than alert security?
The patent description goes on to mention using tamper-evident methods of attaching the detectors to the device or packaging – this is another interesting area, which I am sure we will cover at some point on the blog.