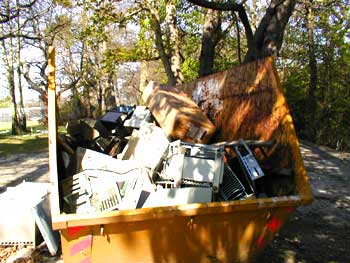 This San Francisco Chronicle review of Giles Slade’s Made to Break: Technology and Obsolescence in America (which I’ve just ordered and look forward to reading and reviewing here in due course) mentions some interesting aspects of built-in (planned) obsolescence – and planned failure – in technology and product design:

“A new machine that does something different (the PC), or adds new capability (cell phone versus land line) or adds new features (cell phones with Internet, etc.) is an obvious incentive for a consumer to replace the old machine. But besides the apparent progress of the new and improved, there are other factors that encourage consumers to buy and rapidly throw away products.
Changes in style (the annual model change adopted by the auto industry being the best-known example) and appeals to status encouraged by massive advertising are major forms of “psychological obsolescence,” specifically designed to create demand for new versions of old and still usable products. But another way of selling new machines at a faster rate is to make sure the old ones break down sooner. This practice of “death-dating” is what most people think of when they hear the term “planned obsolescence.”
…
Slade discovered a much earlier instance in a 1932 pamphlet by real estate broker Bernard London, who was arguing in favor of it [planned obsolescence]. The Depression may seem a weird time to propose that things break down as soon as possible, but London was looking at it from the producer’s standpoint. If people could be induced to replace things sooner, he reasoned, sales and jobs would increase, and the economy would improve. London seemed to want to go so far as to make planned obsolescence a legal requirement.
London wasn’t entirely alone — there were advocates of all kinds of obsolescence to stimulate the 1930s economy. Slade notes several industries where manufacturers knew how to death-date their technologies, usually with less durable materials, and they did so, with the additional excuse of cutting costs and the price.”

The discussion of the US’s mounting levels of electronic waste from rapid replacement cycles contains an intriguing aside:

“Things are likely to get much worse in the near future, thanks to better enforcement of the international ban on exporting hazardous waste expected in coming years ($100 bills taped to the inside of inspected cartons currently help grease this activity, Slade notes), and especially due to the FCC-mandated switch to high definition TV in 2007, which may result in millions of suddenly junked televisions. “This one-time disposal of ‘brown goods’ will, alone, more than double the hazardous waste problem in North America.”

Are artificial, government-mandated fillips to hardware retailers, such as the HDTV switch noted above, or the analogue TV switch-off in the UK, something we should be worried about, both from an environmental point of view, and as members of the public interested in how our governments’ decisions may be ‘influenced’ by certain large businesses?
After all, in the Bernard London case, manufacturing (and R&D and engineering) jobs would have been created or preserved in a time of great need for the US, but in our own age, the millions of new pieces of equipment being shipped from China will provide many fewer direct benefits for the countries whose citizens are cajoled into purchasing them.
See also Feature deletion for environmental reasons and Case study: Optimum Lifetime Products.