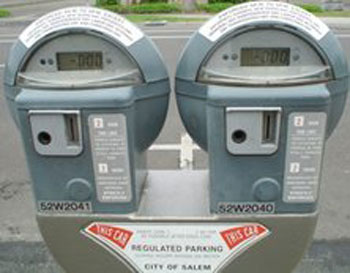 “Perhaps this is too obvious: parking meters; and I mean modern digital ones, enforce arbitrary limits on how much you can pay for at a time (4 hours). Is this to share the enjoyment of democratic parking (at a dollar an hour), or some social engineering ploy to force productive members of the workforce to enter the valet service economy, and thus a reminder of the fact that if they work harder, they could afford a driver?”

Tongue-in-cheek aside, there is something unhelpful, to some extent manipulative, designed into a lot of parking ticket machines (as well as some other vending machines). Take a look at the following machine I photographed this morning in a shoppers’ car park in Pinner, Middlesex, UK: 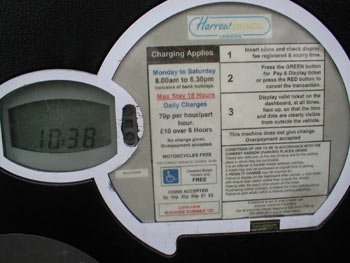 What’s the excuse for the ‘No change given – Overpayment accepted’ policy? It’s not as though it’s technically too difficult to give change: these aren’t mechanical penny gobstopper machines from the 1950s. Sure, it would make each machine a bit more expensive to include the change-giving function, but so what? If every one of the hundreds of people who park each day paid, say, 5 pence extra the cost of the more expensive machine would be recouped within a week or two, surely?
Of course, the real reason for the ‘no change given’ policy is that many customers who arrive at the machine without the 50p + 20p (or other combinations needed to make 70p) will put in Â£1 instead. Thus for a certain percentage of customers, the machine receives 1.43 times the revenue it ought to. I don’t know how many people overpay, but the point is, none of them can underpay. The system is asymmetric. The house always wins.
Does the car park operator (in this case Harrow Council) factor the extra revenue it receives from forcing overpayment into its projected revenues from the machines? Do they record how many people overpay, and use that statistic to plan next year’s budget? Or is overpayment treated as an ‘unexpected’ windfall? Or perhaps, just perhaps, without the overpayment the car park would make a loss?
Any more examples of awful ‘no change given’ implementations, or related anecdotes, musings, etc, much appreciated!