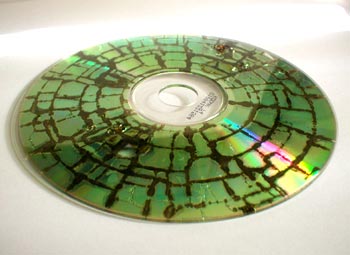 “A patent filed by Sony last week suggests it may once again be considering preventing consumers making “too many” back-up copies of its CDs…
Sony’s latest idea is to place a piece of monitoring hardware inside the CD. Its patent suggests embedding a radio-frequency ID chip that could be interrogated wirelessly by a PC or CD player. The chip would record the number of times the disc was copied and prevent further recordings once it reached the limit. The device could also be fitted to DVDs. Whether Sony will turn the patent idea into reality remains to be seen.”

Of course this will require new CD players and CD-ROM drives with the ability to read, write to and act on the signal from the RFID chip – which means its impact may not be very significant.
It’s not clear whether the “permitted” copies have to be made onto “chipped” Sony-authorised discs (otherwise the technology seems rather pointless, as people will just make copies of the un-protected copies instead of repeated copies of the original) – if this is the case, then is this not just a sly “razor blade model” or “PRM” (in Ed Felten’s phrase) attempt to make Sony CD-writers require the purchase of Sony chipped blank CDs in order to copy music?
And would this break the Orange Book standard for CD-Rs?