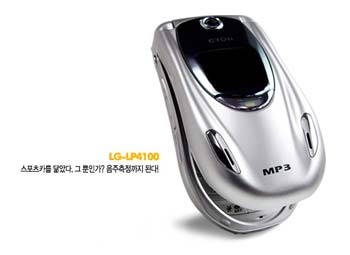 Image from kr.mobile.yahoo.com
Except that it doesn’t, by default – as the story in the Times mentions. You need to set it to block certain “numbers in the adddress book, such as former girlfriends or boyfriends, bosses, parents and kebab houses” when the built-in breathalyser detects that you are over the drink-drive limit.

This is an odd product, though Lucky Goldstar (sorry, couldn’t resist!) clearly knows its own Korean market extremely well. It’s not clear from my cursory research whether using the breathalyser is compulsory if you want to use the phone, or whether this function has to be switched on specifically because the user actively wants to have his or her behaviour restricted – a kind of self-imposed architecture of control. Our ‘rational’ self in a sober state decides to enable the architecture of control to restrict our irrational self at a later time, because we want our sober self to retain control of our actions.
Breathalyser interlocks for car ignition systems could become irritating to drivers if they have to be used every time the car is used, daytime as well as night time (and a false positive could be extremely inconvenient), but proposals for total compulsion have been put forward.
I think I may need a ‘voluntary self-imposed architecture of control’ classification to help assess examples: to what extent are we complicit in restricting our own behaviour and use of products, where such a restriction offerrs us some benefits? If you had a rev limiter you could switch on to keep your car at a more optimal effciency, even though it limited your ability to accelerate, and so on, would you engage it?