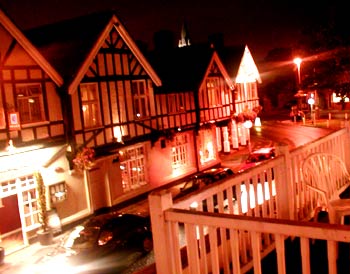 I was woken up (along with, I expect, lots of others) at about 5am today by a driver sounding his/her horn in the road outside – an arrogant two-second burst – then another replying (perhaps) with a slightly feeble one-second tone. I don’t know why; there are often a lot of horns during the day as there’s a level crossing which seems to generate a lot of frustration, but there are no trains passing through at 5am. Anyway, I went back to sleep and had various, fitful dreams, but not before thinking that’s where an architecture of control would be useful: a time-related horn interlock function, only allowing use of the horn during hours when it is legal. In the UK, that would be from 7am – 11.30 pm.

But then, waking up properly a couple of hours later, I remembered my earlier thought. And considered that this kind of control wouldn’t be necessary if people were more considerate towards others. If we could rely on people to care about the effects of their actions, there would be no need for quite a lot of the architectures of control discussed on this site, from speed humps to externally controlled speed limiters, and very little argument in favour of them.
As it is, my modified, awake, more alert opinion is that a society where people take responsibility for what they do is better than one where some external agency takes that responsibility away from them. Or, at least, I don’t want to live in that latter type of society, because I don’t want any control taken away from me, even if I have to put up with some idiots.