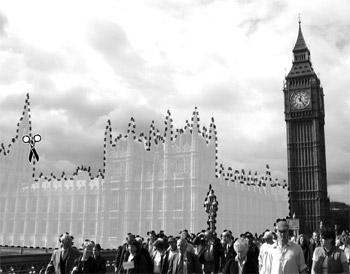 Henry Porter’s chilling Blair Laid Bare – which I implore you to read if you have the slightest interest in your future – contains an equally worrying quote from the LSE’s Simon Davies noting the encroachment of architectures of control in society itself:

“The second invisible change that has occurred in Britain is best expressed by Simon Davies, a fellow at the London School of Economics, who did pioneering work on the ID card scheme and then suffered a wounding onslaught from the Government when it did not agree with his findings. The worrying thing, he suggests, is that the instinctive sense of personal liberty has been lost in the British people.
“We have reached that stage now where we have gone almost as far as it is possible to go in establishing the infrastructures of control and surveillance within an open and free environment,” he says. “That architecture only has to work and the citizens only have to become compliant for the Government to have control.

“That compliance is what scares me the most. People are resigned to their fate. They’ve bought the Government’s arguments for the public good. There is a generational failure of memory about individual rights. Whenever Government says that some intrusion is necessary in the public interest, an entire generation has no clue how to respond, not even intuitively. And that is the great lesson that other countries must learn. The US must never lose sight of its traditions of individual freedom.””

My blood ran cold as I read the article; by the time I got to this bit I was just feeling sick, sick with anger at the destruction of freedom that’s happened within my own lifetime – in fact, within the last nine years, pretty much.
Regardless of actual party politics, it is the creeping erosion of norms which scares the hell out of me. Once a generation believes it’s normal to have every movement, every journey, every transaction tracked and monitored and used against them – thanks to effective propaganda that it’s necessary to ‘preserve our freedoms’* – then there is going to be no source of reaction, no possible legitimate way to criticise. If making a technical point about the effectiveness of a metal detector can already get you arrested, then the wedge is already well and truly inserted.
Biscuit packaging kind of pales into insignificance alongside this stuff. But, ultimately, much the same mindset is evident, I would argue: a desire to control, shape and restrict the behaviour of the public in ways not to the public’s benefit, and the use of technology, design and architecture to achieve that goal.
Heinlein said that “the human race divides politically into those who want people to be controlled and those who have no such desire”. I fear the emergence of a category who don’t know or care that they’re being controlled and so have no real opinion one way or the other. We’re walking, mostly blind, into a cynically designed, ruthlessly planned, end of freedom.
Related: SpyBlog | No2ID | Privacy International | Save Parliament | Areopagitica
*Personally, I have serious doubts about the whole concept of any government or organisation ‘giving’ its people rights or freedoms, as if they are a kind of reward for good behaviour. No-one, elected or otherwise, tells me what rights I have. The people should be telling the government its rights, not the other way round. And those rights should be extremely limited. The 1689 Bill of Rights was a bill limiting the rights of the monarch. That’s the right way round, except now we have a dictator pulling the strings rather than Williamanmary.