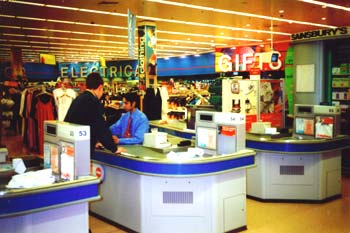 The ‘anarchitect’ group, Space Hijackers* have an interesting A-Z of Retail Tricks To Make You Shop – mostly psychological – including a couple of fascinating examples which aren’t well known, e.g.

“Supermarkets used to have a trick placing slightly smaller tiles on the floor in the more expensive aisles of the shop. When a customer entered on of these aisles their trolley would click faster making them think they were travelling faster and thereby subconsciously slow down and spend more time in that aisle.”

(This is a similar trick to the use of raised yellow painted lines or rumble strips on the approach to roundabouts on high-speed roads in the UK, which become progressively closer as one gets towards the roundabout itself – subconsciously making the driver adjust his/her speed to try to keep the bumps at a constant frequency).
Another trick noted by Space Hijackers:

“Multi-level Department stores often use their escalators to encourage you to see more of the store. Travelling either up or down the store you will find you have to walk half way around the level in order to find your next connecting escalator, as opposed to it being the one next to you. This has not happened by accident.”

This too is worth looking out for:

“Blockbuster realise that when movies are popular and not on the shelves some customers will go to the returns rack (from which the employees stack the shelves) in order to pick up new films before they hit the shop floor. In order to boost sales of older films, the company decided to spike the returns rack with films that had not been hired in order to make them seem more popular.”

*From the ‘Who are we?‘ section of the Space Hijackers’ website:

“Our group is dedicated to battling the constant oppressive encroachment onto public spaces of institutions, corporations and urban planners. We oppose the way that public space is being eroded and replaced by corporate profit making space.
We oppose the way that users of space are being put under increasing scrutiny and control by those who own or run it. Be this via CCTV installed to monitor us, or architectural elements designed to control our moods.“