‘Choice of default’ is a theme which has come up a few times on the blog: in general, many people accept the options/settings presented to them, and do not question or attempt to alter them. The possibilities for controlling or shaping users’ behaviour in this way are, clearly, enormous; two interesting examples have recently been brought to my attention (thanks to Chris Weightman and Patrick Kalaher): 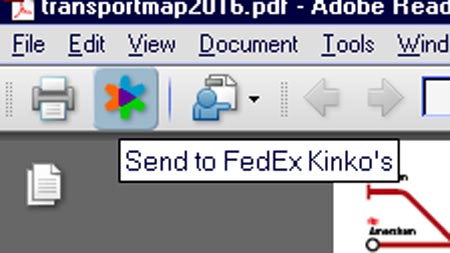 Recent versions of Adobe’s PDF creation and viewing software, Acrobat Professional and Adobe Reader (screenshot above) have ‘featured’ a button on the toolbar (and a link in the File menu) entitled “Send to FedEx Kinko’s” which upload the document to FedEx Kinko’s online printing service. As Gavin Clarke reports in The Register, this choice of default (the result of a tie-in between Adobe and FedEx) has irritated other printing companies and trade bodies sufficiently for Adobe to agree to remove the element from the software:

Adobe Systems has scrapped the “send to FedEx Kinkos” print button in iAdobe Reader and Acrobat Professional, in the face of overwhelming opposition from America’s printing companies.
Adobe said today it would release an update to its software in 10 weeks that will remove the ability to send PDFs to FedEx Kinkos for printing at the touch of a button.
…
No doubt the idea of linking to a service that’s often the only choice presented to consumers in the track towns of Silicon Valley made eminent sense to Adobe, itself based in San Jose, California. But the company quickly incurred the wrath of printers outside the Valley for including a button to their biggest competitor, in software used widely by the design and print industry.

I wonder how many users of Acrobat/Reader actually used the service? Did its inclusion change any users’ printing habits (i.e. they stopped using their current printer and used Kinko’s instead)? And was this due to pure convenience/laziness? Presumably Kinko’s could identify which of their customers originated from clicking the button – were they charged exactly the same as any other customer, or was this an opportunity for price discrimination?
As some of the comments – both on the Register story and on Adobe’s John Loiacono’s blog – have noted, the idea of a built-in facility to send documents to an external printing service is not bad in itself, but allowing the user to configure this, or allowing printing companies to offer their own one-click buttons to users, would be much more desirable from a user’s point of view.
In a sense, ‘choice of default’ could be the other side of process friction as a design strategy. By making some options deliberately easier – much easier – than the alternatives (which might actually be more beneficial to the user), the other options appear harder in comparison, which is effectively the same as making some options or methods harder in the first place. The new-PCs-pre-installed-with-Windows example is probably the most obvious modern instance of choice of default having a major effect on consumer behaviour, as an anonymous commenter noted here last year:

Ultimately, though, you can sum up the free-software tug-of-war political control this way: it’s easiest to get a Windows computer and use it as such. Next easiest to get a MacOS one and use it as such. Commercial interests and anti-free software political agenda. Next easiest is a Linux computer, where the large barrier of having to install and configure an operating system yourself must be leapt. Also, it’s likely you don’t actually save any money upfront, because you probably end up buying a Windows box and wiping it to install Linux. Microsoft exacts their tax even if you won’t use the copy of Windows you’re supposedly paying them for. 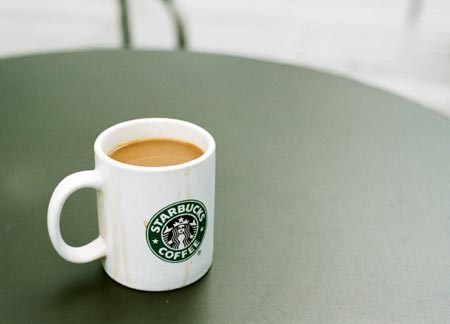 Photo by veryfotos.
Sometimes ‘choice of default’ can mean actually hiding the options which it’s undesirable for customers to choose:

Here’s a little secret that Starbucks doesn’t want you to know: They will serve you a better, stronger cappuccino if you want one, and they will charge you less for it. Ask for it in any Starbucks and the barista will comply without batting an eye. The puzzle is to work out why. The drink in question is the elusive “short cappuccino”–at 8 ounces, a third smaller than the smallest size on the official menu, the “tall,” and dwarfed by what Starbucks calls the “customer-preferred” size, the “Venti,” which weighs in at 20 ounces and more than 200 calories before you add the sugar.
The short cappuccino has the same amount of espresso as the 12-ounce tall, meaning a bolder coffee taste, and also a better one. The World Barista Championship rules, for example, define a traditional cappuccino as a “five- to six-ounce beverage.” This is also the size of cappuccino served by many continental cafÃ©s. Within reason, the shorter the cappuccino, the better.
…
This secret cappuccino is cheaper, too–at my local Starbucks, $2.35 instead of $2.65. But why does this cheaper, better drink–along with its sisters, the short latte and the short coffee–languish unadvertised? The official line from Starbucks is that there is no room on the menu board, although this doesn’t explain why the short cappuccino is also unmentioned on the comprehensive Starbucks Web site, nor why the baristas will serve you in a whisper rather than the usual practice of singing your order to the heavens.

The rest of this Slate article* from 2006, by Tim Harford, advances the idea that this kind of tactic is designed specifically to allow price discrimination:

This is the Starbucks way of sidestepping a painful dilemma over how high to set prices. Price too low and the margins disappear; too high and the customers do. Any business that is able to charge one price to price-sensitive customers and a higher price to the rest will avoid some of that awkward trade-off… Offer the cheaper product but make sure that it is available only to those customers who face the uncertainty and embarrassment of having to request it specifically.

Initially, one might think it a bit odd that the lower-priced item has survived at all as an option, given that it can only be a very small percentage of customers who are ‘in the know’ about it. But unlike a shop or company carrying a ‘secret product line’, which requires storage and so on, the short cappuccino can be made without needing any different ingredients, so it presumably makes sense to contnue offering it.
Thinking about other similarly hidden options (especially ‘delete’ options when buying equipment) reveals how common this sort of practice has become. I’m forever unticking (extra-cost) options for insurance or faster delivery when ordering products online; even when in-store, the practice of staff presenting extended warranties and insurance as if they’re the default choice on new products is extremely widespread.
Perhaps a post would be in order rounding up ways to save money (or get a better product) by requesting hidden options, or requesting the deletion of unnecessary options – please feel free to leave any tips or examples in the comments. Remember, all progress depends on the unreasonable man (or woman).
*There is another tactic raised in the article, pertinent to our recent look at casino carpets, which I will get around to examining further in due course.