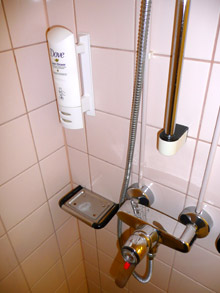 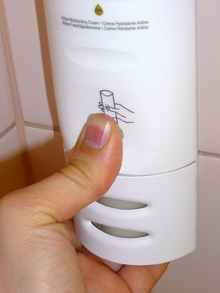 The plastic* of this built-in Dove shower cream bottle I encountered in a Finnish hotel recently was significantly stiffer than the consumer retail version. The idea is that you press the side of the bottle where indicated to dispense some cream, but it didn’t deform anywhere near as easily as expected, with the result that the ‘portion size’ of the product was much smaller than you might dispense if you were at home.
Is this deliberate? The hotel wants to spend less on Dove, so it wants customers to use less of it, and the manufacturer obliges by making a bottle that’s more difficult to squeeze? Whereas with the retail version, the manufacturer wants the customer to use as much as possible, as quickly as possible?
Is it a similar (but inverse) tactic to the Lather, Rinse, Repeat effect?
Or am I reading too much into it? Is it just that the bottle is going to have to last longer, with multiple refills, so stiffer plastic’s used?
*HDPE, I think