Something which came out of the seminar at Brunel earlier this week (thanks to everyone who came along) was the idea that any method of selecting ways to design products that aim to shape or guide users’ behaviour really must incorporate some evaluation of users’ actual goals in using the product – users’ intent – alongside that of the designer/planner. This seems obvious, but I hadn’t explicitly thought of it before as a prerequisite for the actual selection method (instead, I’d assumed these kinds of issues could be shaken out during the design process, based on designers’ experience and judgement, and then in user testing). In retrospect it really does need to be considered much earlier in the process, while actually choosing which approaches are going to be explored. (Given how long I’ve spent reading about bad design and poor usability, you’d think I’d have twigged this earlier.) 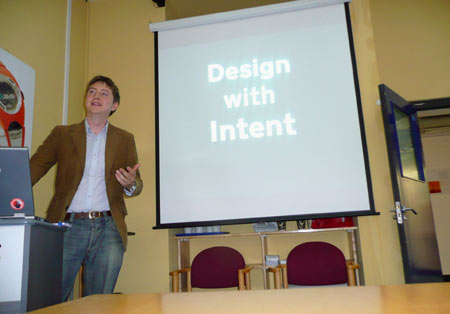 As longer-term readers may remember, back in 2005, I initially approached this whole subject from a very anti-control point of view. Products, systems, environments which seek to control or coerce the user into particular behaviours are, ultimately, not desirable, and the user mentality which seeks to avoid that control, or circumvent it, is something to be applauded, and very much necessary for the advance of society. Designing ‘for’ emergence is difficult; but emergent behaviour – at the very least, weak emergence – will emerge anyway.
Now, I still very much hold the anti-control belief – the proliferation of fundamentally anti-user artefacts in public space (as we see every couple of weeks on the blog) still astonishes me – but the major insight that led to taking on the PhD and the direction since the end of 2007, has been that, applied in a different context, some of the same techniques can actually help the user, improving efficiency and helping society at the same time. All design is persuasive, perhaps: any design technique can be used for ‘good’ or ‘evil’, just like any other tool. Guiding/persuasion/coercion may all be part of a continuum, depending on your point of view, but if something is (transparently) helping you to achieve something which benefits you, you’re less likely to try and find a way round it.
Rest assured, then, I will attempt to include recognition of this in the method that’s being developed, even if it’s a simple step that asks the designer to consider that the particular technique under consideration “has been shown to provoke user resistance/hostility/reaction” and hence maybe isn’t ideal. We’re all users, even designers: even supercilious councillors were kids once, and we mustn’t lose sight of that.
Heading north-east
I’m going to be away for a few days in Finland presenting at Persuasive 2008 (in fact, should be there already as this post appears on the blog), so the posts might get a bit slower/briefer for a while: apologies if I haven’t/don’t reply to your emails or comments (yet), but I hope to do so as soon as I can. It’d be great to do a bit of Jan Chipchase-style blogging while I’m experiencing these liminal spaces of departure lounges and interstitial connexions: I’ll see what I can do.