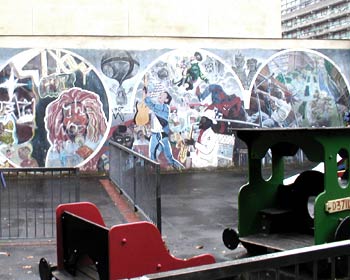 Josie Appleton, at the always-interesting Spiked, takes a look at the increasing systemic hostility towards ‘young people in public places’ in the UK: ‘When did ‘hanging around’ become a social problem?’
As well as the Mosquito, much covered on this site (all posts; try out high frequency sounds for yourself), the article mentions the use of certain music publicly broadcast for the same ‘dispersal’ purpose:

“The Local Government Association (LGA) has compiled a list of naff songs for councils to play in trouble spots in order to keep youths at bay — including Lionel Richie’s ‘Hello’ and St Winifred’s School Choir’s ‘There’s No One Quite Like Grandma’. Apparently the Home Office is monitoring the scheme carefully. This policy has been copied from Sydney, where it is known as the ‘Manilow Method’ (after the king of naff, Barry Manilow), and has precursors in what we might call the ‘Mozart Method’, which was first deployed in Canadian train stations and from 2004 onwards was adopted by British shops (such as Co-op) and train stations (such as Tyne and Wear Metro).”

(I do hope each public broadcast of the music is correctly licensed in accordance with PPL terms and conditions, if only because I don’t want my council tax going to fund a legal battle with PPL. Remember, playing music in public is exactly equivalent to nicking it from a shop, and, after all, that’s the sort of thing that those awful young people do, isn’t it?
I also wonder why there is a difference between a council playing loud music in public, and a member of the public choosing to do so. If kids took along a stereo and played loud music in a shopping centre or any other public place, they’d get arrested or at the very least get moved on.
What would the legal situation be if kids were playing exactly the same music as was also being pumped out of the council-approved/operated speakers, at the same time? It can hardly be described as a public nuisance if it’s no different to what’s happening anyway.
What if kids started playing the same music as was on the speakers, but out-of-synch so that it sounded awful to every passer-by? Maybe shift the pitch a little (couple of semitones down?) so the two tracks overlayed cause a nice ‘drive-away-all-the-customers’ effect? What would happen then? What if kids build a little RF device which pulses repeatedly with sufficient power to superimpose a nice buzz on the council’s speaker output?)
Anyway, Ms Appleton goes on to note a new tactic perhaps even more extreme than the Mosquito, and a sure candidate for my ‘designed to injure‘ category (perhaps not actually endangering life, but close):

“Police in Weston-super-Mare have been shining bright halogen lights from helicopters on to youths gathered in parks and other public places. The light temporarily blinds them, and is intended to ‘move them on’, in the words of one Weston police officer.”

Wow! Roll on the lawsuits. (Nice to know that the local air ambulance relies on charitable donations to stay in the air, while the police apparently have plenty of helicopters available)
The article quotes what increasingly appears to be the official attitude:

“…this isn’t just about teenagers committing crimes: it’s also about them just being there. Before he was diverted into dealing with terror alerts, home secretary John Reid was calling on councils to tackle the national problem of ‘teenagers hanging around street corners’. Apparently unsupervised young people are in themselves a social problem.”

As we know from examining the Mosquito, this same opinion isn’t restricted to Dr Reid. It was the Mosquito manufacturer Compound Security’s marketing director, Simon Morris, who apparently told the BBC that:

“People have a right to assemble with others in a peaceful way… We do not consider that this right includes the right of teenagers to congregate for no specific purpose.”

So there you have it. As Brendan O’Neill puts it in a New Statesman piece referenced in the Spiked article:

“…Fear and loathing… is driving policy on young people. We seem scared of our own youth, imagining that “hoodies” and “chavs” are dragging society down. We’re so scared, in fact, that we use impersonal methods to police them: we use scanners to monitor their behaviour, we blind them from a distance, and now employ machines to screech at them in the hope they will just go away. With no idea of what to say to them – how to inspire or socialise them – we seek to disperse, disperse, disperse. It will only heighten their sense of being outsiders.”