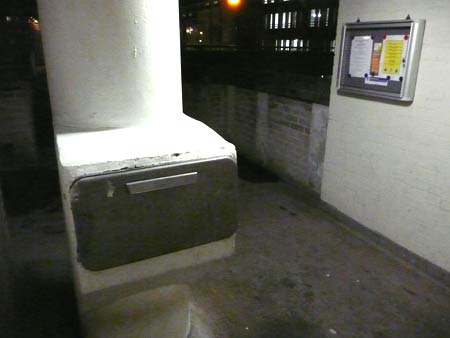 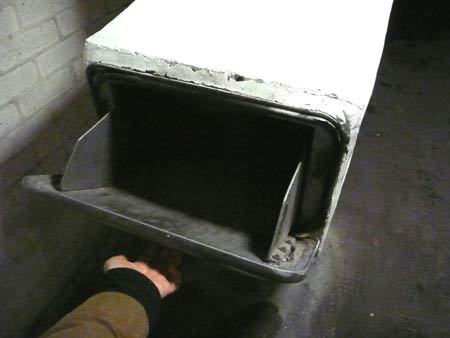 This is a communal rubbish chute serving a block of flats. The cross-sectional area of the aperture revealed by opening the hatch should be smaller than the cross-sectional area of the chute itself, so there’s less chance of rubbish bags getting stuck, even when someone crams one in.
That aperture dimension is important. It (to a large extent) determines the volume of rubbish that can be thrown away in one go. That in turn determines the size of the bins that users of this chute will (probably) have in their houses or flats, and thus how often the bin will have to be emptied. Taking the rubbish out can be a chore; halving the bin size doubles the number of trips to the chute, doubles the inconvenience.
It is, therefore, more desirable not to throw too much away. At the very least, having a smaller bin will make users aware more often of just how much waste they’re generating.
But does that have any measurable effect on purchasing decisions in the first place, assuming that more minimally packaged products are available as an alternative to those with excess packaging? How strongly coupled are the (limited) affordance of a smaller bin, and, at a couple of removes, in-store decisions? Is that rubbish bin, or indeed the chute aperture itself a social actor, a messenger, capable of persuading people to change their behaviour purely by existing with one set of dimensions rather than another?
Effectively, do people with smaller rubbish bins in their houses consciously buy items with less packaging?
Where else is this modified affordance -> inconvenience -> behaviour change pattern used as a strategy? As with making parking spaces deliberately smaller to make owning a large vehicle less convenient, the strategy may have some potential.