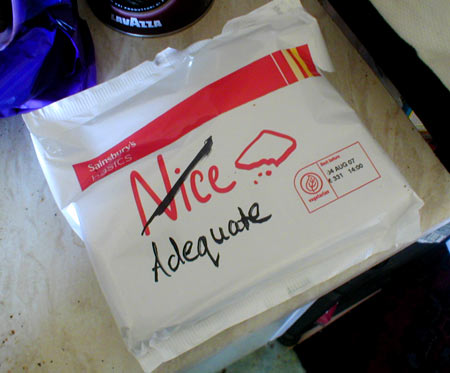 Both Dr Tom Stafford (co-author of the fantastic Mind Hacks book & blog) and Gregor Hochmuth (creator of FlickrStorm, an improved Flickr search system) have been in touch suggesting packaging/portion sizes as a significant everyday architecture of control, (or at least an aspect of design which has a major impact on consumers’ behaviour, and can be used to change it), and pointing to articles on the work of Professor Brian Wansink, of Cornell University’s Food & Brand Lab.
From the New York Times:

Dr. Wansink… probably knows more about why we put things in our mouths than anybody else. His experiments examine the cues that make us eat the way we do. The size of an ice cream scoop, the way something is packaged and whom we sit next to all influence how much we eat. His research doesn’t pave a clear path out of the obesity epidemic, but it does show the significant effect one’s eating environment has on slow and steady weight gain.
In an eight-seat lab designed to look like a cozy kitchen, Dr. Wansink offers free lunches in exchange for hard data… His research on how package size accelerates consumption led, in a roundabout way, to the popular 100-calorie bags of versions of Wheat Thins and Oreos, which are promoted for weight management. Although food companies have long used packaging and marketing techniques to get people to buy more food, Dr. Wansink predicts companies will increasingly use some of his research to help people eat less or eat better, even if it means not selling as much food. He reasons that companies will make up the difference by charging more for new packaging that might slow down consumption or that put seemingly healthful twists on existing brands. And they get to wear a halo for appearing to do their part to prevent obesity.

This bit is especially interesting to me (as an improvised-gadget kind of guy):

Dr. Wansink is particularly proud of his bottomless soup bowl, which he and some undergraduates devised with insulated tubing, plastic dinnerware and a pot of hot tomato soup rigged to keep the bowl about half full. The idea was to test which would make people stop eating: visual cues, or a feeling of fullness. People using normal soup bowls ate about nine ounces. The typical bottomless soup bowl diner ate 15 ounces. Some of those ate more than a quart, and didn’t stop until the 20-minute experiment was over.

More on that here, though sadly no pictures.
The British Psychological Society’s Digest, mentioning Wansink’s work, focuses further on the ‘visual cues’ aspect: it appears that even when the serving is larger than normal in plain sight (as opposed to a deceptive bowl), the size of the portion still does not cause people to stop when they think they’ve had enough rather than when the bowl or plate ‘tells them’ they’re finished:

In four field studies, the researchers measured the amount eaten by 379 participants, half of whom were served with a particularly large bowl or plate of food. The participants given the extra-large servings ate an average of 31 per cent more food than the control participants. But crucially, just 8 per cent of them said afterwards that they thought they’d eaten any more than they would usually do. When told they’d been given an extra-large portion, 21 per cent continued to deny they’d eaten any more than usual, and of those who accepted they had eaten more than usual, only 4 per cent attributed this to the large plate or bowl their food had come in, with most others saying they’d eaten so much because they were hungry.
“This hesitancy to acknowledge one being influenced by an external cue is common and has even been found when people are presented with tangible evidence of their bias”, the researchers said… “Altering one’s immediate environment to make it less conducive to overeating can help us lose weight in a way that does not necessitate the discipline of dieting or the governance of another person”.

Of course, there are some other aspects to consider. There is certainly a tendency to eat what’s put in front of you because it’s perceived as bad manners not to, and there’s the extra tendency to try to ‘please’ the person running the experiment, but both of those assume that the participant realises there is more food than he or she would normally eat. Yet the above findings suggest that people genuinely don’t know how much they’ve eaten (relative to a ‘normal’ serving). 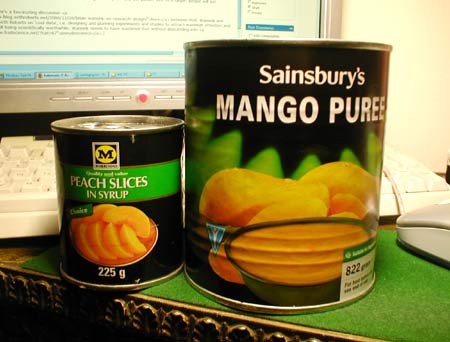 Implications for designers
The simplistic implication is that people will eat what they’re given. If you make the packet size 20% larger, people will (probably) eat 20% more in one sitting. If Burtons made Wagon Wheels a little smaller each year (that’s a UK reference, but I’m sure there are equally well-known versions of the idea worldwide), it will take a while before anyone notices that the portion is smaller.
But there are clearly limits to this, or at least a point where the consumer consciously thinks either “hang on, I’d better not eat all that in one go,” or “that wasn’t enough – I’ll have another one.” We all know this experience. Looking at the photo above, I’d happily eat two of those little tins of peaches in one go, but I’ve never got round to opening that big tin of mango purée as I can’t see that I’d eat it all in one go (if I were with someone else, I might share it).
Between those upper and lower bounds, though (which of course will differ from culture to culture, and person to person), there must be a size range within which changes are either not noticed by the consumer, or not cared about enough to cause any change in behaviour: 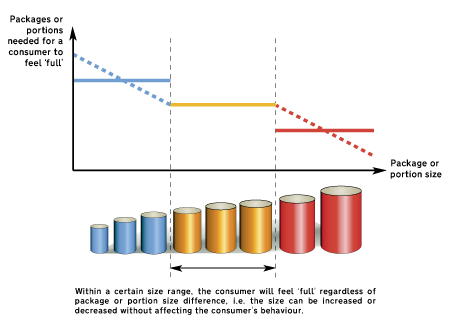 I’ve no real evidence for this, of course, other than my own perceptions and a general inspiration by the Wansink quotes above, but the central section of the graph, at least, seems fairly clear. For smaller and larger portions, the amount a consumer would eat at a sitting (to feel ‘full’) could either also be constant (over another interval) or have some proportionality to size, depending on the context. For example, if the package/portions in question were something easily re-sealable, or easy to store, a consumer might eat from it proportionally to size, perhaps opening it again at different times, but if the package pretty much has to be eaten all in one go, or shared, to avoid spoilage, then the relationship might be a constant.
So, if this model holds, a packaging/portion size reduction from the upper bound of the central interval to the lower bound may actually not affect the consumer’s behaviour. If he or she is used to eating the whole packet in one go, he or she will still eat the whole packet in one go, and still feel ‘full’ to the same extent. Thus, reducing packaging/portion sizes within a certain range (the most common sizes, probably) is a sensible way of gradually, subtly, reducing people’s food intake (equally, raising them within the range would have the opposite effect, again without consumers noticing so much).
This is not too dissimilar from the phenomenon of unit bias, of course – “Consumption norms promote both the tendency to complete eating a unit and the idea that a single unit is the proper portion“, but it’s important to remember the ‘within a certain range’ qualification. A tiny bowl of soup, despite being a ‘unit’, will not fool anyone.
One question which does arise from thinking about packaging and portion sizes is to what extent established sizes (weights, volumes) have affected consumers’ habits. Is it coincidence that, say, a typical bag of crisps (potato chips) in the UK used to be 1 oz (around 28g), and that that’s about the portion that most people ate in one go? In the last ten years though, cheaper brands have reduced to 25g or less, and premium brands escalated up to 38g or 45g – and yet still people eat one packet at a time, even when it may be almost double the weight of another. When the default size of spirit measures in pubs has gradually risen from 25 ml (down from 1 fl oz previously?) up to 35 ml or even doubles (50 ml) unless the customer specifies otherwise, this must have an effect on consumers’ behaviour. Most people do not spend double the time drinking a 50 ml measure that they do a 25 ml measure. They drink it in perhaps a few seconds longer, yet have imbibed double the amount of alcohol. (Equally, the shape of glasses affects perceptions of liquid quantity – more of Prof Wansink’s research.)
Hence, this choice of default can have a major effect on behaviour, and is surely a powerful control technique in itself, as an anonymous commenter on a previous post explained very well. 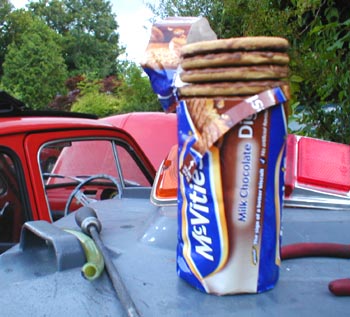 We’ve looked in some detail before at packaging designed to increase consumption of the product, such as (perhaps) the McVitie’s packet shown above, where in practice the first five biscuits will often be eaten by the person who opens the packet, since the tear-strip is positioned so far down. Odd sized portions were a significant point of comment here – dishwasher & washing machine tablets, increase in standard wine glass sizes, Actimel bottles and large yoghourt pots were all mentioned as being in this category.
To some extent, then, the sizing of packaging and portions ought to be considered a forcing function alongside more obvious physical behaviour-shaping constraints. It could, in fact, be a very important way of promoting (forcing?) healthier eating.
(Incidentally, there’s a fascinating discussion here between Prof. Wansink and Berkeley’s Prof. Seth Roberts on ‘cool data’, i.e. designing and planning experiments and studies to attract maximum attention and interest whilst still being scientifically worthwhile. Wansink seems to have mastered that without descending into pseudoscience.)
(P.S. My apologies to both Tom and Gregor for the delay in posting about this)